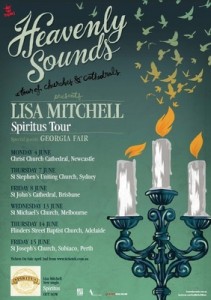 Last year the inaugural Heavenly Sounds tour of churches and cathedrals came to life with sold-out shows across the country featuring Seeker Lover Keeper. This June, Heavenly Sounds is delighted to announce the return of this unique and intimate touring concept featuring Lisa Mitchell with her band and a choir to celebrate the release of her brand new single, Spiritus.

Spiritus means, ‘breath’ or ‘life-force’ and was written at Lisa’s parents home in the country. “I later recorded it with Dann Hume and we filled it with light rhythmic energy and percussion from all over the world! It became full of people and voices and laughter and spirit,’ says Lisa of the track.

Set in the architectural splendour, rich acoustics and otherworldly ambience of the church setting, Lisa Mitchell will thrill with her delicate vocal style – revisiting captivating tunes from her AMP award-winning album Wonder (Coin Laundry, Neapolitan Dreams, Oh Hark and Clean White Love) and introducing her new aptly-titled single Spiritus as well as an exclusive sneak preview of songs from her forthcoming sophomore album due out later this year.

It’s been just under three years since Lisa released her debut platinum-selling album Wonder, embarking on a non-stop touring schedule including international tours with Mumford & Sons, her own headline tours and an inspired set at UK’s legendary Glastonbury festival performing alongside Neil Young, Bruce Springsteen and Nick Cave. With Lisa currently putting the finishing touches to her new record, she once again has the stages of the world in her sights:

“How romantic it will be to play the first tour for my new album inside beautiful historic churches!” says Lisa. “I am so looking forward to sharing these special shows with the talented band that I’ve found and with the listeners that find themselves in the pews! And I haven’t even mentioned, the darling men of Georgia Fair will be kicking off the evening with their floating harmonies! What an incredible tour we have to look forward to.”

With their organic, low-key harmonies and sophisticated, acoustic folk-pop, Sydney based duo Georgia Fair are indeed the perfect match to open proceedings for this unique musical experience in some of Australia’s most beautiful live settings.