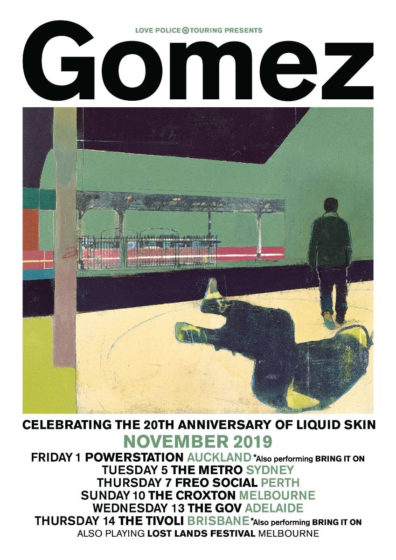 Post-Britpop pioneers Gomez are returning to Australia this year to celebrate the upcoming re-issue of their seminal 1999 album ‘Liquid Skin’. They will be performing the album in full along with some of their biggest hits around Australia this November as well as a headlining slot at The Lost Lands in Melbourne to be announced soon.

Bursting out of Southport, England in 1996 as a bunch of 20-something self proclaimed music ‘nerds’, Gomez achieved unprecedented success with their first release ‘Bring It On’. After winning the 1998 Mercury Music Prize over Massive Attack and The Verve, and playing two sets at Glastonbury after a fortuitous main stage slot opened up last minute, the band were perfectly positioned to release their now definitive second album ‘Liquid Skin’.

Touted as a ‘bigger, even more confident’ album than their debut, ‘Liquid Skin’ brought with it singles including We Haven’t Turned Around and Rhythm & Blues Alibi, as well as crowd favourites Bring It On, Blue Moon Rising and Devil Will Ride. With the album’s success on both British and Australian music charts, it makes sense that Gomez would choose to bring their 20th Anniversary album re-issue tour to our shores. After a very brief visit last year, playing only Bluesfest and a few sideshows, Gomez have a special treat for their Brisbane fans who might have missed out; they’ll be playing both ‘Liquid Skin’ and ‘Bring It On’ in full exclusively at their Tivoli show.

Pre-sale tickets available from 11am on Friday May 3rd here,
with the password ‘Liquid’.
General on sale at 11am on Tuesday May 7th.

Pre-sale tickets available from 11am on Friday May 3rd here,
with the password ‘Liquid’.

General on sale at 11am on Tuesday May 7th.