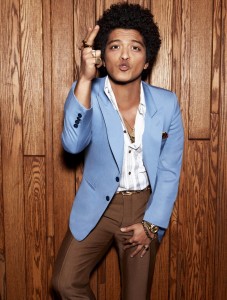 BRUNO MARS has announced he will bring his Moonshine Jungle Tour to Australia in February, 2014.

The tour announcement comes hot on the heels of an electrifying performance at The Logies last Sunday, and Bruno Mars and his full band are set to lift the roof off Perth Arena, Melbourne’s Rod Laver Arena, Sydney’s Allphones Arena and the Brisbane Entertainment Centre, unleashing such blockbuster hits as ‘Locked Out of Heaven’, ‘The Lazy Song’, ‘When I Was Your Man’, plus #1 hits ‘Just The Way You Are’ and ‘Grenade’ in Mars’ biggest ever Aussie shows.

My Live Nation members can be among the first to secure tickets during the member pre-sale beginning 9am Monday April 15. Sign up at www.livenation.com.au

Hawaiian-born Bruno Mars stepped into the spotlight featuring on hit singles McCoy’s ‘Billionaire’ and B.o.B.’s ‘Nothin’ On You’ and soon launched his solo career dropping his debut full-length album in 2010. ‘Doo-Wops & Hooligans’ (Warner Music) – home to smash hits ‘Just The Way You Are’, ‘The Lazy Song’, ‘Grenade’, ‘Marry You’ and ‘Count On Me’ – the album received massive commercial and critical success, reaching four-times platinum in Australia and more than 39-times platinum worldwide.

Spearheaded by the chart-topping multi-platinum ‘Locked Out of Heaven’, Mars’ delivered his eagerly awaited sophomore album ‘Unorthodox Jukebox’ (Warner Music) in December 2012. A phenomenal hit around the world, the multi-platinum album has so far spent three consecutive weeks at #1 and still resides in the ARIA Top 10 after 15 chart weeks on the chart.

‘Unorthodox Jukebox’ also features the ‘multi-platinum smash hit ‘When I Was Your Man’ which has spent seven weeks in the Top 10 ARIA singles chart and currently sits in the Top 20 after 17 weeks.