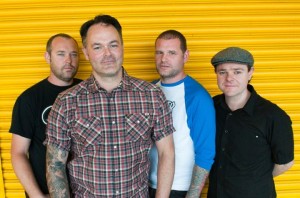 For a band that’s been broken up in more ways than one in recent times it’s been a busy year for Bodyjar already!

Late last year the band announced their intention to reform to celebrate the release of their landmark 1998 album ‘No Touch Red’ on vinyl, as well as the CD re-issue of all of their first three albums – ‘Take A Look Inside’, ‘Rimshot’ and ‘No Touch Red’ re-mastered with plenty of bonus tracks.

Worryingly in the interim, one of the Bodyjar blokes sustained a broken arm when he successfully intervened on behalf of a young woman being hassled by a mob of gutless goons.

For a while the shows looked in a bit of doubt, but undeterred Bodyjar proceeded with organising the Vic and SA legs of the NO TOUCH RED tour, resulting in sell out show after sell out show with a top-shelf, classic Aussie punk rock line-up in support. To date all the shows have all been overwhelmingly met with rave reviews and much punter happiness.
When asked about the shows so far, and particularly the scare with the broken arm, the band member in question said, “No dramas. The shows have been awesome! And it’s been great to see a lot of the old crew again … and really, let’s face it, I always wanted a metal rod in my strumming arm anyway. Finally Bodyjar have gone bionic!”

And now, good to their word, the Jar are pleased to announce the NSW & QLD dates as promised.

All shows with ONE DOLLAR SHORT & FOR AMUSEMENT ONLY and more supports to be announced!