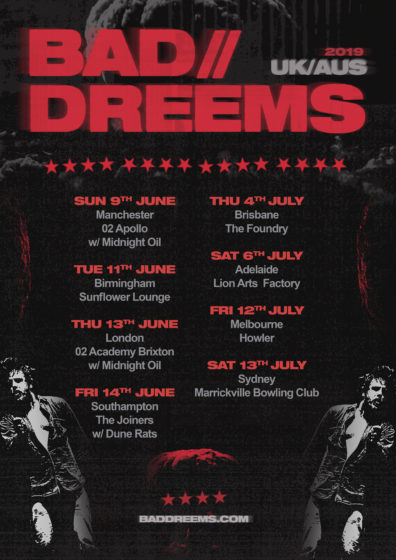 Australia’s favourite barnstorming five-piece Bad//Dreems are back with their latest single ‘Double Dreaming’, the first taste of what to expect from their forthcoming album due out October this year via Farmer and the Owl, and today they announce a string of headline shows along the East Coast this July in support of the new single.

Since its release ‘Double Dreaming’ has been racking up playlist features across all streaming services, picking up airplay across community radio stations, as well as receiving an add on triple j.

Debuting their latest release to audiences across Sydney, Melbourne, Adelaide & Brisbane, along with fan favourites, get in quick to witness ‘Double Dreaming’ live for the first time!

Bad//Dreems head to the UK in June for a number of headlines shows and two opening sets for Midnight Oil, and have just been announced on the line up for Yours and Owls Festival in October.