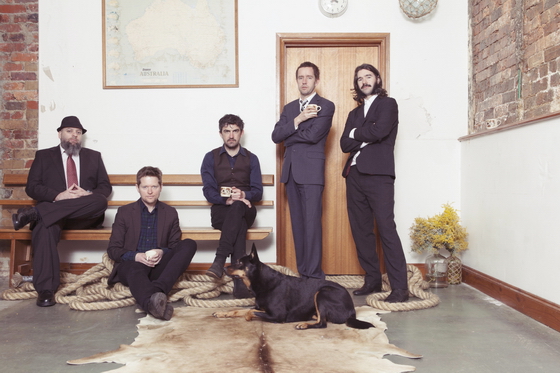 In June 2014, one of Australia’s finest and most-loved bands Augie March announced their return from a six-year hiatus. This very welcome news was swiftly followed by the announcement that the band had quietly been creating a fifth studio album, Havens Dumb, in Hobart and Melbourne over the preceding three years. The band’s return to the live stage came in the form of playing at Howler, a few streets away from the scene of their first-ever show sixteen years earlier, in Brunswick Victoria. They ended up doing five nights in a row by popular demand. It was indeed a triumphant return, with the band in best-ever form, playing better than ever, and enjoying themselves for the first time in a long time.

Fans around the country and indeed the world have been hoping the band would decide to play some more shows and it is with the greatest pleasure that Augie March announce a national tour in some of the finest performances spaces the nation has to offer, from the Meredith Supernatural Amphitheatre to Hobart’s Mona to the Sydney Opera House, Melbourne Recital Centre, Her Majesty’s Theatre Adelaide and the Astor Theatre in Perth. They also play Brisbane’s great new live space The Triffid, the Ulumbarra Theatre in Bendigo and Tanks Art Centre in Cairns. Augie March – Glenn Richards, Kiernan Box, Edmondo Ammendola, Adam Donovan and Dave Williams, plus a horn section – will play these special concerts featuring songs from throughout their 17-year career.