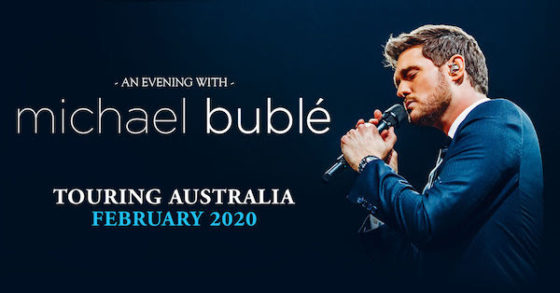 TEG DAINTY announced that global superstar Michael Bublé will return in February 2020 with a 36-piece orchestra to thrill Australian audiences on his five-city tour taking in Brisbane, Sydney, Adelaide, Melbourne and Perth.

President and CEO of TEG DAINTY Paul Dainty said he was delighted to bring Michael Bublé back to Australia: “Michael is a superstar and Australian fans are amongst his biggest in the world, he is an artist who has completed multiple sold-out world tours, won four Grammy Awards and sold more than 60 million records, including 3.3 million in Australia, during the course of his extraordinary career,” Mr Dainty said.

Bublé said he was thrilled to be playing all of his hits plus songs from the most recent album ♥ for Australian audiences.

“I’m really excited to be heading back on tour and to play for Australian audiences again,” he said. “It’s been six years since my last Australian tour and so much has happened in that time. I can’t wait to sing some of my all-time favourites and to share my new songs and stories.”

Bublé received rave reviews for a one-off show in Sydney in late last year when he performed to mark the closure of Allianz Stadium. The Sydney Morning Herald praised a performer “who holds the audience in the palm of his hand” and whose “soaring vocals absolutely knock it out of the park”, while the Daily Telegraph admired Bublé’s success at “wrapping his golden tonsils around some of the most iconic songs of pop history”.

This tour is supporting Bublé’s ♥ album, which has achieved Gold status in Australia since its release in November 2018 when it debuted at #2 on the ARIA Albums Chart, the Herald Sun said Bublé “was back to doing what he does best – telling love stories”.

Bublé has achieved five number one albums in Australia, including 2013’s To Be Loved, 2011’s Christmas, 2009’s Crazy Love, 2007’s Call Me Irresponsible and 2003’s Michael Bublé, and eight top five albums. His Christmas album has sold more than one million albums in Australia.