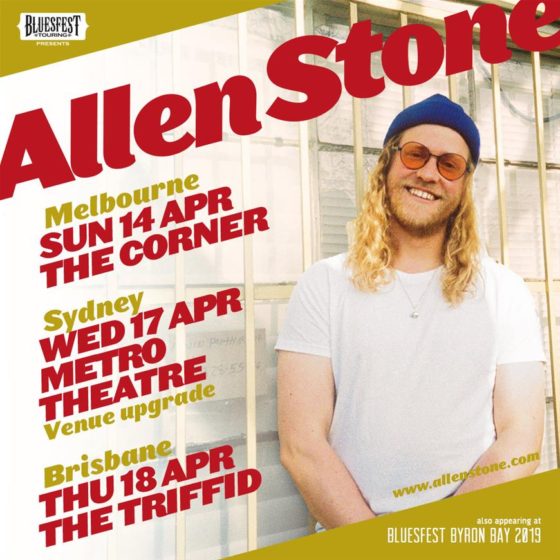 Just one week after getting married to his ‘Brown Eyed Lover’ and a hugely successful sold-out show in Melbourne; Allen Stone announces he will be spreading the love to dates in Sydney, Melbourne and Brisbane this April!

Allen Stone’s vocals and melodic style show the clear influence of classic soul and R&B of the 1960s and ‘70s, while his lyrics reveal an idealism and passion that recall the folk-inspired singer-songwriters of the same era.

Earlier in 2018, Allen appeared on ‘American Idol’, performing a powerful duet of ‘Unaware’ with contestant Dennis Lorenzo and blew judges away with his powerful vocals, including Lionel Richie who amazed, said – ‘That was spectacular’. His latest release, ‘Warriors’ was first performed at the Special Olympics opening ceremony in Seattle earlier this year, where Stone was back during the performance by a 2,000-member choir. Commenting on the song, Allen stated ‘This song came in a period of struggle. Inspiration hadn’t come through to visit for a while. I had felt like I was just pushing a big rock up a hill while wearing flip-flops. I was reminded in that moment that true success comes when you face adversity head on and push through those moments of hardship. Walk tall like Warriors even when terrified’.

Allen Stone is currently working on his next album, recorded live in Nashville which is set to be released early 2019.