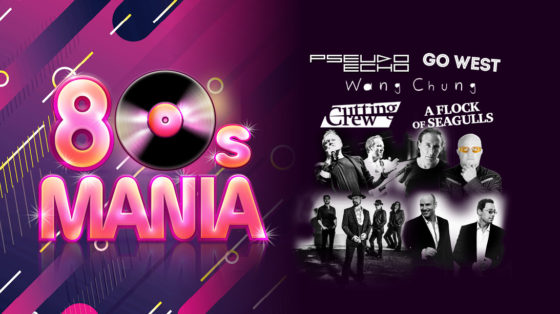 The best of the 80s is coming back to Australia in November 2019!

Abstract Entertainment is proud to announce five of the biggest 80s International music acts: Go West, Wang Chung, The Cutting Crew, A Flock Of Seagulls and Australia’s own Pseudo Echo is bringing the best of the 80s back with an East Coast tour – and Perth!

The incredible lineup features some of the best artists of the era!

Go West: the much loved duo Peter Cox and Richard Drummie enjoyed massive international success with hits such as We Close Our Eyes, Call Me and Don’t Look Down. Their biggest hit was The King Of Wishful Thinking which featured on the soundtrack to Pretty Woman and was a US Top 10 Hit.

Wang Chung: This English new wave band formed in the early 80s but enjoyed their biggest success in the mid 80s with songs such as Let’s Go!, Everybody Have Fun Tonight and Hypnotize me. The phrase Everybody Wang Chung Tonight became a popular phrase in the 80s and is still recognized now! It has been referenced on various TV shows and movies including The Simpsons, Cheers, Veronica Mars, That 70s Show, The Spy Who Shagged Me and so many more.

Cutting Crew: This English rock band formed in 1985 and are best remembered for songs such as (I Just) Died in Your Arms, I’ve Been in Love Before, One for the Mockingbird, and Everything But My Pride.

Pseudo Echo: Pseudo Echo continues to be one of Australia’s favourite live bands. Achieving chart success in the 80s with singles such as ‘Listening’, ‘A Beat For You”, ‘Love A Adventure’, ‘Don’t Go’ and many more. Their biggest hit ‘Funky Town’ went to #1 in 1986 and achieved top 10 charts in Canada, the US and New Zealand. Fronted by the enigmatic Brian Canham, Pseudo Echo continue to release original music while still playing their big 80s hits to fans across Australia.