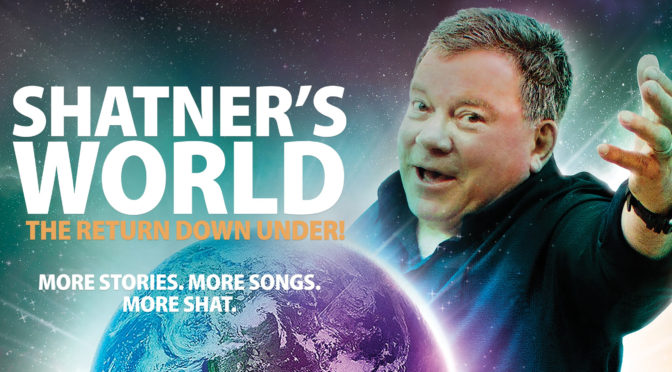 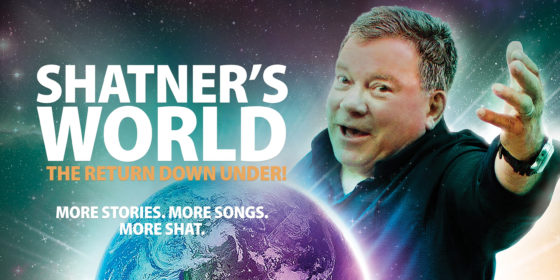 Without doubt, one of the most popular and recognisable cultural icons in the world today.

“He has gone where no man has gone before, chased down criminals in an unnamed city strangely resembling Los Angeles and fought off demons while speaking Esperanto. And a half-century into his Hollywood career, he still has the. Most. Recognizable. Cadence. In Showbiz. At 87, William Shatner has no plans to slow down.” Washington Post

William Shatner, pop culture icon, television superstar and raconteur extraordinaire, is returning to Australia with SHATNER’S WORLD – THE RETURN DOWN UNDER this October 2018 for a National tour.

Sharing more stories, songs, jokes and musings Shatner’s World, THE RETURN DOWN UNDER takes audiences on a 100 minute theatrical voyage through his life and career, from Shakespearean stage actor to internationally acclaimed icon and raconteur, known as much for his unique persona as his expansive body of work including Star Trek, Boston Legal, the publication of 30 books and the release of several spoken word albums, his latest, a soon to be released country music album and Christmas album!

“I’ve done this one-man show on Broadway and in many cities across the United States,” said William Shatner. “At the curtain call, the audiences’ reaction, their love and appreciation, moved me to tears. This show has been one of the highlights of my life.”

Bringing it back to where it all started is very special. With “The Return Down Under” I’ll be bringing more stories and songs. When you have been around and have worked in this business for as long as I have, there’s a heck of a lot to share. Australian audiences will also be able to hear some of my latest musical endeavours performed live for the very first time. It’s going to be a hell of a lot of fun.

Shatner’s World has been described as a, “chatty, digressive, and often amusing tour of his [Shatner’s] unusual acting career,” by the New York Times, “a fun evening of personal reminiscence, gossip, video clips and old-fashioned humor,” by AM New York and “equal parts endearing and funny – a mixture of two worlds, really: every day and rarefied,” by The Philadelphia Enquirer. Shatner himself has been praised as, “the most confident of performers,” by The Record and “a personality of galactic proportions,” by the New York Post. Shatner’s humour and ability to poke fun at himself, make this show a must-see memoir of a Hollywood veteran’s life.

Shatner is an award-winning actor, director, producer, writer, recording artist, philanthropist and horseman. In 1966, he introduced the character of Captain James T. Kirk in the television series “Star Trek.” The series became a film franchise with Shatner as Kirk in seven movies, one of which he directed. He also played the title role in the hit series “T.J. Hooker” before hosting TV’s first reality-based series “Rescue 911.” Shatner won two Emmys and his first Golden Globe for his portrayal of Denny Crane on “The Practice” and “Boston Legal” and received four additional Emmy nominations as well as Golden Globes and SAG Awards.

Off screen, Shatner has authored over 30 bestsellers in both the fiction and non-fiction genres. His autobiography “Up Till Now” was a New York Times bestseller and in 2011 he released “Shatner Rules,” a collection of rules illustrated with stories from his personal life and career. In 2016 Shatner released “Leonard: My Fifty Year Friendship with a Remarkable Man” about his enduring friendship with the late Leonard Nimoy.

He has also been successful in another area—horse breeding. A dedicated breeder of American Quarter horses, he has had enormous success with the American Saddlebred, developing and riding world champions and has won numerous world championships in several events.

Tickets for Shatner’s World go on pre-sale from the 25th July
and available to the General Public from July 30, 2018.
www.shatnerdownunder.com