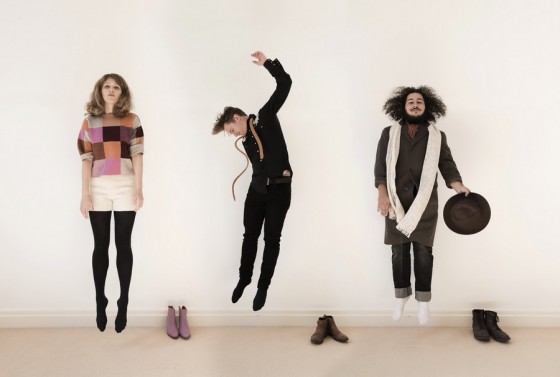 “We wanted to reflect our daily lives at the moment while not being on the road. Suburban, prosaic and benign but never without strangeness, humour and whimsy.” ~ Tinpan Orange

Melbourne indie-folk darlings Tinpan Orange have unveiled an eccentric video clip to accompany their brand new single ‘You’re Not There’.

The surreal suburban daydream is the result of working with videographer James Base and concept designer Peter Salmon-Lomas to create a fun and striking piece. Written about the end of a relationship, the video is an obscure interpretation of loneliness featuring invisible friends, dancing and a giant toy rabbit.

The 70s inspired alt-country folk ballad is the first taste from their forthcoming fifth studio album to be released in early 2016. Co-written and co-produced with Harry James Angus of The Cat Empire, ‘You’re Not There’ features lead vocalist Emily Lubitz’s distinctly angelic voice played out over harmonies and sensitive guitar melodies, and is another melancholic yet heartwarming insight into the world of Tinpan Orange.

Lead by the ethereal and mesmerising vocals of Emily Lubitz, with brother Jesse Lubitz on harmonies and guitar, and Alex Burkoy on strings, Tinpan Orange is one of this country’s most exciting and hardworking acts.

At the beginning of 2015, the band received two Australian arts grants, which helped them on their way to make their fifth album in their hometown of Melbourne with the album being mixed by Portland’s folk production king Adam Selzer (M. Ward, Monsters of Folk, Jolie Holland, Laura Veirs), and is set for release in April 2016.

Tinpan Orange is ready to hit the road this summer playing shows and Festivals nationally across Australia.

‘You’re Not There’ is out now via tinpanorange.com