On the back of sold-out preview shows earlier in the year, THIRSTY MERC mark their official return to Australian audiences, with a new sound, a new guitarist, a new single (out May 21st) and their exciting new album (out June 18th). The MOUSETRAP HEART Tour kicks off in the nation’s capital on June 30th.

Recorded in Los Angeles with super producer Matt Wallace [Faith No More, Maroon 5], MOUSETRAP HEART signifies a revamped and reinvigorated Thirsty Merc, and reintroduces the band with a dynamic new sound. The Sydney four-piece are clearly feeling refreshed, and you can hear it in the music. Everything is tighter and funkier, with an unmistakable bounce in their step.

From the album’s opening notes, the first seven songs are a wild, rollicking, no-fat, groove-fuelled odyssey, filled with fast moving arrangements and spilling over with Rai’s razor-sharp, occasionally hilarious turns-of-phrase and succinct observations of real life.

Then, towards the end, MOUSETRAP HEART, the album takes on a more introspective vibe, closing with a trilogy of emotive, open-hearted ballads. It is a world-class display in modern songwriting and an electric performance from one of Australia’s most technically proficient rock ensembles.

The lead single “MOUSETRAP HEART” is an infectious gem and immediately earns its place alongside the band’s previous popular hits, including “Emancipate Myself”, “In The Summertime”, “Someday, Someday”, “20 Good Reasons” and “The Hard Way”. The tight piano-driven groove in “MOUSETRAP HEART” is propelled by a snappy vocal delivery, with an undeniably infectious hook that happily runs laps in your head.

Experience THIRSTY MERC in concert this June/July, as one of Australia’s premier live acts explode back onto the touring scene with the MOUSETRAP HEART Tour. 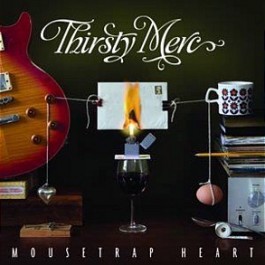