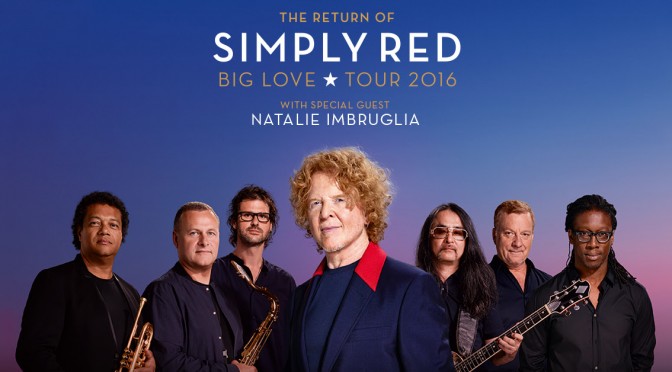 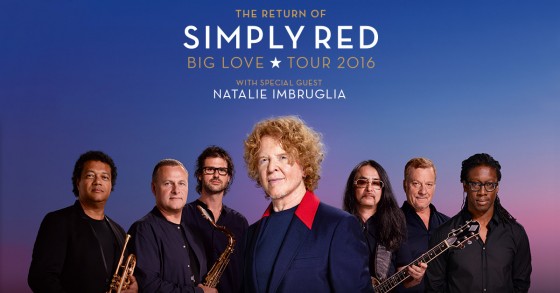 SIMPLY RED’s The Big Love Tour lands in Australia this February following a sold-out European arena tour, playing national dates including an evening ‘On The Steps’ at the Sydney Opera House Forecourt and four A Day On The Green winery dates.

Simply Red have now announced a second Melbourne show – playing the hits and classics, plus select tracks for their new album Big Love – at the Palais Theatre on Wednesday February 17.

The band will joined on tour by special guest, Natalie Imbruglia.

Tickets for this second Melbourne performance will go on sale at 10am Monday November 2.

Telstra Thanks is bringing an exciting 48-hour pre-sale just for Telstra customers from 12pm Tuesday, October 27 until 12pm Thursday, October 29. For more information on how to purchase, visit: telstra.com/music.

Following a tour of Australia and New Zealand in October 2010, Simply Red finished its unbroken 25-year run with a farewell concert at London’s O2 that December. Fast-forward to 2015, and buoyed by the hugely positive response to their excellent new album ‘Big Love’ (available through Warner Music Australia), Simply Red will hit the road again, and in high spirits, playing all their classic hits. Fans will also rejoice at the release of ‘Song Book’, a four CD release with accompanying 36-page booklet celebrating 25 years of the band’s music.

Simply Red’s music has a timeless quality that has seen the band have top ten hits through the 80s, 90s and 2000’s, with album sales exceeding 60 million worldwide.

The band’s 1985 debut album ‘Picture Book’ headed into a 60s R&B groove, featuring super hits Hold Back the Years and Money’s Too Tight (To Mention). 1987’s million-selling ‘Men and Women’ went towards funk, and the vastly successful albums ‘A New Flame’ (1989) – home to If You Don’t Know Me By Now – and the hit laden ‘Stars’ (1991) found the balance between pop and soul. When Simply Red veered into contemporary dance music with the number one hit Fairground and the 1995 album ‘Life’, they imbued it with their own, unique sound.

Natalie Imbruglia will be special guest at all Australian shows. The pop singer’s debut album, 1997’s ‘Left of the Middle’, sold seven million copies worldwide and featured the single Torn, which hit No. 1 on multiple charts around the world, including the U.S. Billboard Top 40, and was certified platinum in the U.K. and her native Australia. With her latest album, ‘Male’, just out, her first since ‘Come to Life’ in 2009, Natalie is returning to live performance, also touring Europe and the UK with Simply Red.

One of Australia’s most-loved performers, the fabulous Tina Arena will be a very special guest at all A Day On The Green shows.

*Presented by A Day On The Green
For event & ticketing information, visit:
www.adayonthegreen.com.au