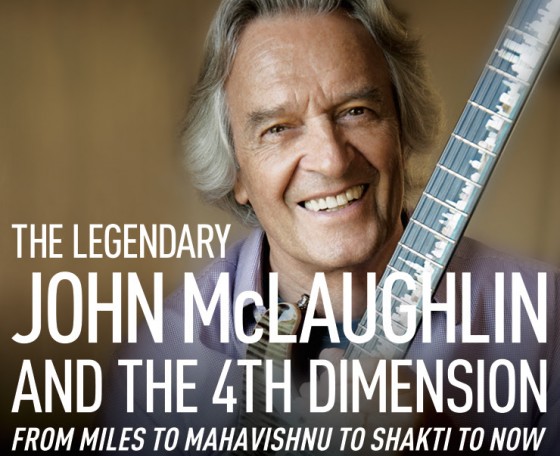 October will herald the much-anticipated return to Australian soil of pioneering virtuoso guitarist JOHN McLAUGHLIN, for headline performances in Perth, Sydney and Brisbane, and now two shows in Melbourne.

With the Melbourne Festival show on October 14 sold out, McLaughlin will perform a second and final show at the Melbourne Recital Centre on Monday October 12.

These dates mark McLaughlin’s first headline shows in Australia in nearly 25 years, having not toured with his own band since 1991. McLaughlin was last here for five shows with Chick Corea as part of their Five Peace Band project in 2009.

Tickets for this second Melbourne show will go on sale 9am this Friday, September 25.

In Perth, McLaughlin’s show will move to the Astor Theatre (previously at the Perth Concert Hall). There is no change of show date, Tuesday October 6.

As a musician, composer and bandleader, John McLaughlin’s contribution to contemporary improvisational music is undeniable.

From his work with Miles Davis during the legendary “Bitches Brew” and “Jack Johnson” sessions, then with Mahavishnu Orchestra, with Shakti and now with his current band, The 4th Dimension, McLaughlin’s work has obliterated the boundaries dividing jazz, rock and global musical traditions.

Now, John McLaughlin is prepared to break through yet again, with what he feels is his most personal statement to date: Black Light.

On his 18th full-length LP, McLaughlin has returned to acoustic guitar for a tribute to his friend, Paco De Lucia, entitled “El Hombre Que Sabia” and brings forth a depth of sadness and admiration beyond words. “I have explored ways in music and recorded them with happiness,” McLaughlin notes. “Black Light has opened a portal that is neither jazz nor rock, nor Indian nor blues, and yet all of these: it’s an open door.”

Black Light also features the 4th Dimension in full flight, with their empathy and precision honed on stage and in the studio.

Don’t miss out on the remarkable and genre-defying performances by John McLaughlin and the 4th Dimension live in concert.

All other shows on sale now.