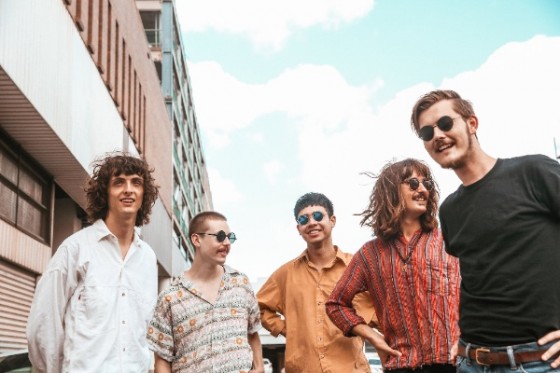 Since their formation in 2013, Brisbane five piece The Jensens have provided us with rage-worthy tunes that have been played long into the early morning all over the country! With their unmistakable sleek vintage undertones, infused with modern surf rock swagger, The Jensens today announce a brand new single (not to be confused with their previous EP) ‘Everybody Talks’ and two shows in Sydney and Melbourne. The single is the first taste of the lads’ follow-up EP, which is set for release early next year.

Ready yourself for the summer of 2017’s surf rock anthem! Cue blazing drums, breezy guitar riffs and a catchy AF chorus that you will know well before the temperature hits 40 degrees! For the band, “Everybody Talks is about a break up or even the end of a friendship. The chorus is about the actual conversation, the happening, that moment when you both know that you won’t be seeing each other like you have been for the last weeks or months or even years. And then it’s over. And no one else knows, everybody talks about a break up, or how they used to be friends with someone but its only between you and that other person.”

The latest EP was recorded at the exact same time as the previously released Everybody Talks in Brisbane’s Plutonium studio with Steven Kempnich and the fellas on producing duties. Even with the foresight of releasing separately, the band had designed both EP’s to be played simultaneously, as one collective experience. The latest single ‘Everybody Talks’ was named before the release of the EP and, in a sense, is a nod to the unseen future, but also a way of connecting and entwining the two projects.

The retro-rockers’ performances across Brisbane’s bursting live scene, as well as the consistent buzz nationally proves time and time again that their live shows are a force to be reckoned with. The band have previously supported UK legends The Vaccines, as well as sharing the stage alongside local outfits Last Dinosaurs & Art of Sleeping. This is in addition to earning some sweet, sweet airplay from triple j for singles ‘Fears’, ‘Shark Thunder’ and ‘Elvis is Dead’ – all which go absolutely wild live!

Listen to The Jensens ‘Everybody Talks‘:

Purcase ‘Everybody Talks‘ at:
https://itunes.apple.com/au/album/everybody-talks-single/id1173758854?ls=1&app=itunes