Ever since their 1998 self­titled debut album, The Haunted have been gathering more and more awards, outshining all others in their field. Being crowned with such titles as “one of metal’s 25 Most Important Bands” and winning awards such as “Album of the Year” and “Best Hard Rock Album”, The Haunted have definitely proved their worth consistently and show no signs of slowing down.

Comprised of ex­members of At The Gates and frontman Peter Dolving, the Swedish heavy metallers have become a devastating live act that are not to be fucked with. Having toured with bands such as Lamb of God, Cannibal Corpse, and Slayer, the cocksure swagger of their live show make their already first­class melodies come alive and have a backbone that could stand up to any audience.

Lead singer Peter Dolving has told us that he is “fully prepared for anything that is thrown his way” and you better be too as The Haunted have put Australia in their cross­hairs once more and are ready to terrorize all with their Hate Songs yet again. 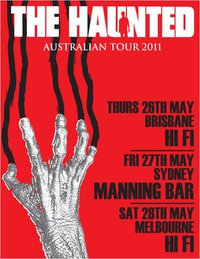