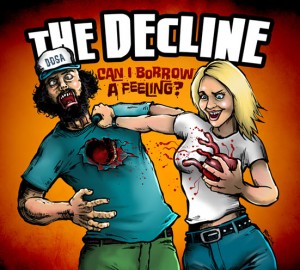 Rabble-rousing, good times WA skate-punks The Decline are stoked to announce they’ll be unleashing a fresh 5-track EP and kicking off a national tour real soon. Pee Records are proud to present the fully crowd-funded, fully sick ‘Can I Borrow A Feeling?’ EP.

More than 8 years in and two albums deep, The Decline are a respected and recognisable name amongst the international punk community. 2013 was a stand-out year for the local stalwarts; they supported long time heroes Descendents, undertook a month-long European outing, a Japanese tour with 90’s So-Cal super-band Implants (members of Strung Out, Pulley) and an epic Australian tour with Isreali punkers Useless ID. These efforts earned them a WAMi nomination in the punk/hardcore category and ensured they came out of the gates strong in 2014, nabbing a coveted afternoon slot at the Perth Soundwave festival. It’s clear that the force rages strong with these guys.

The band have teamed up with seminal Adelaide’s punk and hardcore label Pee Records to release ‘Can I Borrow A Feeling?’, the band’s first release in three years. Scooping up a whopping $7.5k through crowd-funding, the 5 energetic, melodic gems on the record were recorded at Electric City Studios in Fremantle and mixed and mastered by Jay Maas (from Defeater) at Gateway Recordings in Boston. And it’s wrapped in some seriously icky artwork courtesy of Mike Foxall (X-Ray Studio), who also rocks in Nancy Vandal. ‘Can I Borrow A Feeling?’ is packed with ripping, raw and uber enjoyable skate-punk – a pre-curser to the third album The Decline will pump out later this year.

The Decline’s live shows are celebrated for being fast, fun and tight as hell, so prepare to give your eardrums a bashing and your liver a very solid workout, as the band will be thundering around the nation through May. Don’t miss out on the truly epic local punk line-ups that have been cultivated for you fist pumping pleasure.

Fri 2nd May – Crowbar, Brisbane QLD
With The Hardaches (SA) Goon On The Rocks, Epics (NSW), No Trust

Thurs 8th May – The Reverence Hotel, Melbourne VIC
With Initials, Take Your Own, Speech Patterns (TAS)

Sat 10th May – Crown and Anchor, Adelaide SA
With The Hardaches, The Spatchcocks

Fri 16th May – Rosemount Hotel, Perth WA
With The Novocaines, Tired Lion, Sail On! Sail On! & Being Beta 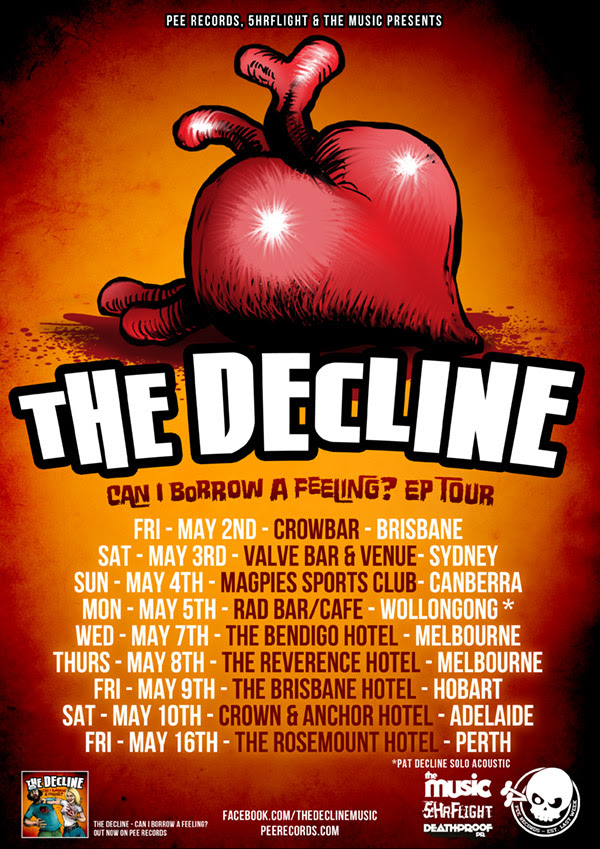