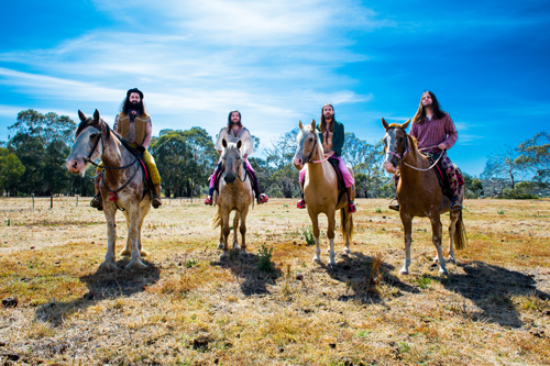 Welcome to the Wisdom Machine: a journey into the mind of The Bennies.

The highly anticipated follow up to 2013’s Rainbows In Space, Wisdom Machine is 11 tracks of fuel for the soul.

Recorded at Holes And Corners in South Melbourne with Sam Johnson and released through Poison City Records, the album is spearheaded by ‘Party Machine’, a song that almost wasn’t to be. Written three days before the band entered the studio and inspired by their time at Psyfari – a trance camping festival three hours out of Sydney, the “disgusting-party-banger,” as singer Anty Horgan jokingly puts it, became an instant fan favourite. Added straight to triple j rotation, the band toured the single across the country selling out shows in Sydney, Brisbane, Cairns, Darwin and their hometown of Melbourne.

Wisdom Machine is far more than just party anthems however, seeing The Bennies explore new directions; from the politically charged Sabbath inspired ‘Corruption’, to the personal, seven-minute epic ‘O Brother, Where Art Thou?’ Delving deeper into their collective influences, Wisdom Machine is boldly ambitious, but you wouldn’t expect anything less from the four piece. Not only does the sound of Wisdom Machine venture into new grounds aurally, but visually we see a psychedelic journey being realised through the artwork. The artwork is a collaboration between Chris Cowburn (The Smith Street Band) and Geoffrey Horgan (Anty’s dad). Testament to their ability to merge genres, 2015 saw the band continue to win over new audiences, this time at festivals including Golden Plains, Soundwave and Falls. There was also their viral Like A Version performance of TISM’s ‘(He’ll Never Be An) Ol’ Man River‘ which erupted across the Internet.

A ruthless touring schedule locally and abroad has seen the band play in China, Japan and America in recent years, as well as perform alongside, and befriend, many of their favourite artists; a feat subtly alluded to in Wisdom Machine. ‘Maybe We Could Get High’ features guest vocals from Jay Whalley of Frenzal Rhomb, with whom the band toured alongside NOFX in late 2014, as well as Ezra Kire from New York band Morning Glory and formerly Leftöver Crack and Choking Victim who sings on ‘Turning Around’. There’s also a roaring horn section featuring cameos from members of Melbourne bands The Kujo Kings and Beacons on ‘Burn Out City’, ‘Heavy Reggae’ and ‘O Brother, Where Art Thou?’.

The Bennies will tour Wisdom Machine across Australia in March and April with support from Minneapolis punk band Off With Their Heads (Epitaph Records) and Adelaide’s Hightime. “Melbourne can’t contain me,” sings Horgan on ‘Burnout City’. With more touring and international dates in the works for 2016, The Bennies machine is unstoppable. 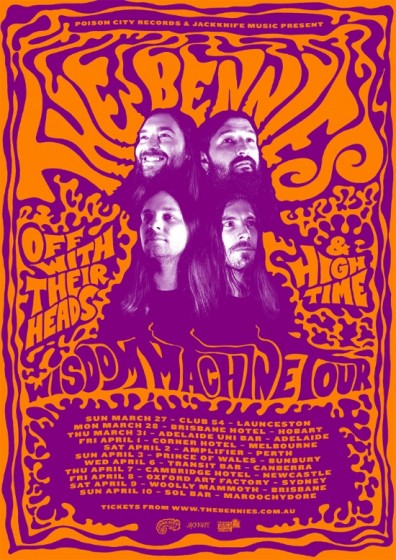