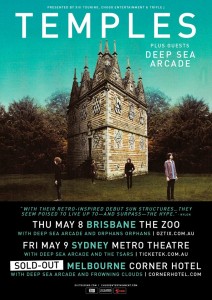 Psychedelic newcomers Temples have announced their first Australian shows in Brisbane, Sydney and Melbourne. Joining Temples for these dates in May will be fellow indie-psychers Deep Sea Arcade.

Combining new technology with vintage ideals, Temples are re-writing the psychedelic template. The four-piece have supported Interpol, Suede, The Vaccines and Kasabian and will be playing Coachella in April before they hit Australian shores.

TICKETS ON SALE NOW
“…though the band may rob from the past, they’re presently in a league of their own” – NME
“Temples are the new standard-bearers of British progressive psych.” – MOJO
DATES – MAY