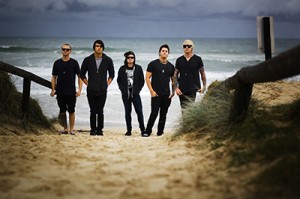 If there was a class for new bands looking to build huge amounts of buzz in as short a time as possible Take Us To Vegas (TUTV) would make perfect teachers. They have picked up over 17,000 new followers on Twitter in the last few months and have doubled their amount of likes on Facebook. Today they have released their new single and film clip “Apparently It’s Frowned Upon” and just upon one listen you can tell that this band is about to take over the airwaves. (Check out the video below)

Since going public in early 2011, TUTV have enjoyed an enviable amount of attention and acclaim. Over the course of the last 18 months, TUTV have supported Broken Heart (U.S.A), 28 Days, Shihad, Bodyjar, Behind Crimson Eyes, House Vs Hurricane, Dangerous, Mourning Tide, Heroes for Hire, Closure in Moscow and Wheatus (USA). After supports with these bands it is a testament to TUTV, that they can already hold their own among seasoned acts. Now, in keeping with the impeccable timing that would make most bands envious, they’re also about to announce a nation-wide/east-coast tour.

Take Us To Vegas may have a lot of buzz, but they also have the skills to back it up. Their new single “Apparently It Is Frowned Upon” is a hit and run of molten guitars, hormonal vocals, and machine-gun rhythms. It is produced by Kalju Tanuma who is responsible for 28 Days, Body Jar and The Temper Trap, just to name a few. The new single has all of the ingredients to gain further attention with calls already being sourced from USA Festivals and USA College bookers.

After having just played a launch show of the single in Brisbane, the boys have also been in Adelaide with Beyond Crimsons Eyes and doing a run of Sydney shows, TUTV will now be doing a run of shows in Brisbane and Melbourne throughout November. See dates below.