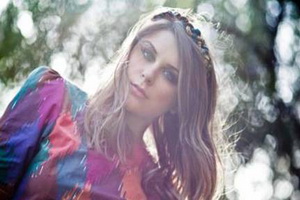 On the eve of her THE ‘RAIDERS’ EP National tour (Tour details here), Brooke took time out for Life Music Media.

:: What track changed your life ::
Across the Universe – The Beatles

:: What is your favourite Album ::
It’s really hard to narrow it down to one because I love different albums according to my moods but one of my all time favourites is Rumours – Fleetwood Mac

:: Favourite Quote ::
Everything happens for reason.

:: When you think of Australia, you think ::
Home

:: Worst thing to happen to music is ::
People not wanting to buy albums.

:: When you were younger you wanted to be ::
A vet or a violin player.

:: First album you ever bought ::
Probably one of the Spice Girls albums

:: First concert you went to ::
The Wiggles in concert.

:: Favourite current band ::
I have been listening to a lot of Seekae.

:: Favourite book ::
At the moment I am reading Barrel Fever – David Sedaris it’s good.
My favourite childhood story is the faraway tree.

:: The best film you ever saw was ::
Almost Famous

:: Your ultimate snack is ::
Smoothie

:: The first thing you do when you wake up is ::
Press the snooze button.

:: Best piece of advice you’ve received ::
Stay true to yourself

:: Your biggest aspirations ::
To be making music for a very long time.