END_OF_DOCUMENT_TOKEN_TO_BE_REPLACED

Having spent the last few months promoting the album in Europe, Lisa Mitchell is returning to Australia in April to kick off her massive Oh Hark! National Theatre Tour. Taking in major capital cities and regional centers across Australia, Lisa is set to play to over 18,000 fans in May. Lisa will play 17 shows over a four week period including appearances at the Enmore Theatre in Sydney and the Forum in Melbourne. Joining Lisa on the road will be folk n slide favorites Boy and Bear and Georgia Fair. 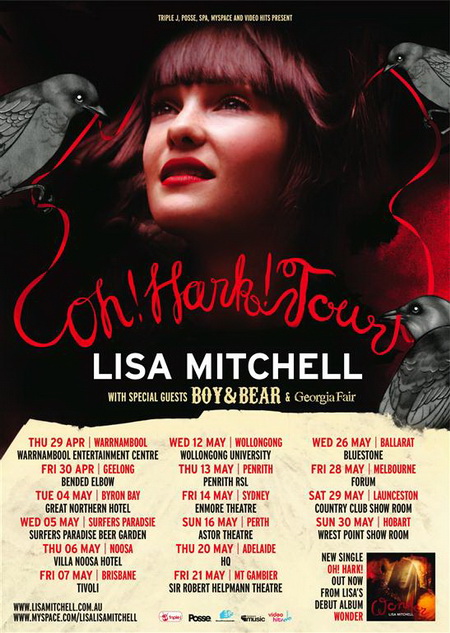 The Lost Weekend festival, set to host the likes of Dinosaur Jr, The Drones and Brian Jonestown Massacre at the Riverstage in Brisbane on March 6-7, has been cancelled.

The statement on the website reads:
The Lost Weekend has been cancelled.

After moving from Ivory’s Rock to the Brisbane River Stage, The Lost Weekend has had insufficient time to achieve critical mass and we have been left with no choice but to cancel the event.

As local promoters it was our dream to run an event similar to other regional events like Meredith in Victoria and to bring such an event to SE QLD.

This is one of the saddest and most difficult decisions we have ever had to make.

We apologise to the real music fans that have supported The Lost Weekend and purchased tickets.

A FULL REFUND will be available to all of you from the point of purchase next week.

We also apologise to the bands who had committed to our dream.

All other information has been removed from the website.
www.thelostweekend.com.au

END_OF_DOCUMENT_TOKEN_TO_BE_REPLACED

Time Off Brisbane wrote “Palmer is an amazing lyricist and composer. One of the best shows that The Tivoli has seen in a long time.”

Rip It Up in Adelaide echoed the sentiment adding “The entire night was an intimate sharing of stories and jokes…Have To Drive and Strength Through Music left the crowd speechless until their very end, some on the verge of tears as they applauded as loudly as possible.” END_OF_DOCUMENT_TOKEN_TO_BE_REPLACED