Mary Poppins
Brilliantly adapted from the beloved books by Australia’s own P.L.Travers and the classic 1964 Walt Disney film, MARY POPPINS is playing in Brisbane from January 2012…

This spectacular production includes all of the best loved songs from the film including CHIM CHIM CHER-EE, A SPOONFUL OF SUGAR, JOLLY HOLIDAY, STEP IN TIME, FEED THE BIRDS and SUPERCALIFRAGILISTICEXPIALIDOCIOUS.
END_OF_DOCUMENT_TOKEN_TO_BE_REPLACED 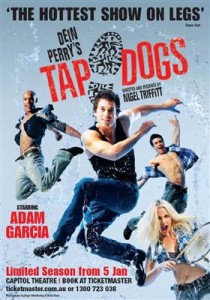 The beat of their tapping feet has reverberated around the world for 15 years, and now Australia’s TAP DOGS is returning home for a strictly limited season.

It will also mark the return of Australia’s International film and theatre star Adam Garcia to the Sydney stage leading the TAP DOGS troupe. END_OF_DOCUMENT_TOKEN_TO_BE_REPLACED