Soundworks Touring presents for the first time in Australia 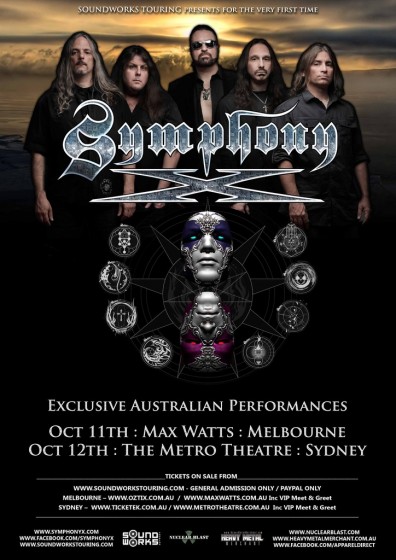 Finally after 22 years of trying, SYMPHONY X are making their way for the first time to Australian terra firma!
With a career spanning 9 full-length albums, and counting, and currently touring behind their Metal Masterpiece “Underworld”, have now set their sites on Australia! SYMPHONY X from the beginning has been known for their sprawling compositions, neo-classical guitar work, and majestic symphonic elements.
Formed by guitar wizard Michael Romeo in 1994, SYMPHONY X over the years has created an innovative mixture of Heavy Metal, Progressive Rock and (Neo) Classical hard sounds; these elements have predestined their albums for an eternity of praise!

ATTENTION: TICKET DEMAND WILL BE EXTREAMLY HIGH DUE TO THESE SHOWS BEING THE FIRST EVER PERFORMANCES OF SYMPHONY X IN AUSTRALIA, SO BUY YOUR TICKETS FAST!