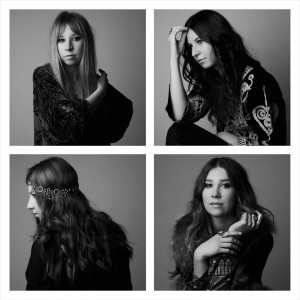 A year removed from the spotlight has resulted in light years’ worth of maturity for Amy, Hannah, Sarah and Holly – collectively known as Stonefield – as they take the next step in their already impressive career trajectory, having emerged from recording their debut album with a soaring new single and fresh run of national tour dates in tow.

Premiered by The Doctor on triple j this afternoon, ‘Put Your Curse On Me’ is the first taste of their long awaited self-titled debut album, which will be released in October.

Produced by acclaimed Band of Skulls producer Ian Davenport and mixed by Grammy-nominated Tim Palmer (U2, Pearl Jam), ‘Put Your Curse On Me’ is a heavy, dynamic and startlingly mature piece of classic rock ‘n’ roll, all backed by the haunting vocals of the Melbourne Mass Gospel Choir. “Having a gospel choir sing on our songs has been a life long dream. That was an incredible experience, hearing them work their magic was pretty emotional” says lead singer Amy.

In support of ‘Put Your Curse On Me’, Stonefield are taking their much-talked-about live show back on the road throughout August and September for a collection of national tour dates, culminating in their debut appearance at Brisbane’s annual Big Sound conference in September.

LISTEN TO STONEFIELD ‘PUT YOUR CURSE ON ME’

STONEFIELD
PUT YOUR CURSE ON ME TOUR
Tickets on sale now