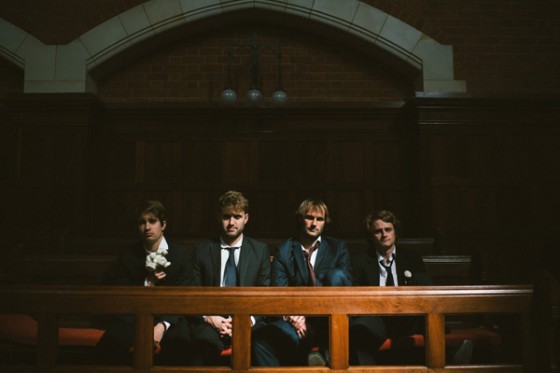 WIth their debut album – Munich – out now and doing the rounds hopefully on car stereos and headphones nation-wide, Stillwater Giants are on fire. Their last single ‘Montage‘ snared triple j support with spot rotation and now they’re proud to deliver another – ‘Mount Street’ – and announce a national tour with reformed fellow-Westerners End Of Fashion.

Of the single and its origin, the band says: “Mount St is the name of the street [frontman] Henry lives on. Henry wrote the song whilst at home thinking about some of the interesting people on his street. A middle aged ‘cat-lady’ (that may possibly be deaf?) would regularly walk around with her black cat on a leash. ‘Bogan Santa’ would stroll up and down the street like he owned the place. With his loud squawking parrot perched on his shoulder, he’d always wear his pluggers, tiny shorts and blue ‘wife-beater’ singlet stained from parrot poo. ‘Hector the Cat’ was a super-fluffy Persian cat that used to squat at our house and usually rocked up with whacky haircuts and an unpredictable attitude.”
Hector’s Facebook page.

In addition to their own local shows, Stillwater Giants will also be touring with End of Fashion, finally bringing their beloved show to territories that they haven’t played in quite sometime.

SATURDAY, SEP 10 | THE ZOO, BRISBANE
with End of Fashion

THURSDAY, SEP 15 | PRINCE OF WALES, BUNBURY
with End of Fashion