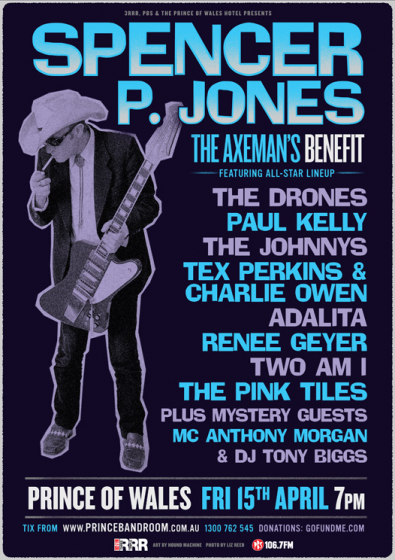 Melbourne’s finest rock musicians will come together for a once in a lifetime show to celebrate the career of axeman and master songwriter Spencer P Jones at the Prince Bandroom in St Kilda on Friday 15th April.

Pals and past collaborators including The Drones, Paul Kelly, Renee Geyer, The Johnnys, Tex Perkins & Charlie Owen, Tim Rogers and Adalita will pay respect and showcase the influence Jones has had on their careers and raise some money to help pay Jones’ recent medical bills.

Author of catchy and poignant tales capturing Australia’s underbelly, driven by his signature guitar sound (Australian Guitar magazine rated Jones as one of Australia’s Top 40 best guitarists), and delivered in his melodic but menacing snarl, his impact on the Australian and international rock scene is unsurpassed in this country.

Spencer came to prominence as guitarist, singer and songwriter with The Johnnys (a band so loved by Neil Young he said he wished he could bottle their sound and spirit) and as one part of inner-city swamp rock supergroup the Beasts of Bourbon. Moving out on his own with his 1994 debut Rumour of Death, Jones has gone on to release ten impeccably crafted country-tinged albums in his own right.

Along his journey, Jones has also been a gun for hire with Paul Kelly, Chris Bailey and The General Dog, Maurice Frawley and The Working Class Ringos, The Sacred Cowboys, Ian Rilen’s Hell To Pay, These Immortal Souls and Shotgun Wedding. And then there’s the international connections – he has played with everyone from the Gun Club to Evan Dando, the Violent Femmes, Shotgun Rationale and Andre Williams as well as touring with members of Television and The Damned.
‘’Spencer Jones is the quintessential rock and roll musician,’’ says Renee Geyer. ‘’He plays with ease and with the sheer raw energy that makes rock and roll what it is. Two words come to mind when I think of SPJ’s playing: heart and abandon.”
Come and support one of Melbourne’s musical treasures.

*Please note that for people who are unable to attend the show, but would still like to contribute to the cause Donations can be made via www.gofundme.com/ccr2fbfg