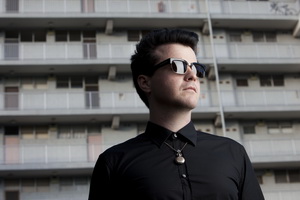 I headed to Sparkadia’s show on Friday April 8 at the Hi Fi in Brisbane with much the same feeling of trepidation that I had on hearing that the band was releasing a new album in March this year. Technically, I knew that the songs on the record were superb, just as I knew that the hype building about the The Great Impression tour and Sparkadia’s new live show had to mean something. I was troubled, though, by clear memories of a gig on the eighteenth of September in 2008 that had changed the way I viewed live music and made me worried that there was only disappointment to come by way of comparison.

The night I remembered was the night of the Brisbane leg of Faker’s This Heart Attack tour. The show was held at The Tivoli, with Sparkadia appearing as their support act. On that night Sparkadia were stunning, true to anticipated stellar form and breathtaking for the young, live music inexperienced me. I had never before heard a band create such atmosphere or mesh rock with beauty so solidly.

By the May of 2009, though, the band I knew as Sparkadia had broken up, with the three members other than front man Alex Burnett heading off in different directions. Burnett, though, chose to continue the Sparkadia project, moving to London and piecing together second Sparkadia album, The Great Impression, with producer and song writer Mark Tieku. The album was released to huge acclaim by the public and critics alike. But still I was wary, could Sparkadia possibly be anything like I remembered, or should I just leave the band to rest as a fond memory?

The answer to that question was apparent the moment that Sparkadia took to the stage on Friday night. After killer sets by both supporting bands Alpine and Operator Please, in which the young musicians demonstrated huge talent and performance confidence beyond their years, the curtains closed for the stage to be set for the main event. Soon enough the lights dimmed, and after a somewhat confusing but pleasant recorded intro of “The Verve’s Bittersweet Symphony”, the curtains parted to reveal the new look Sparkadia.

Alex Burnett oozes passion and sincerity when he plays, and the musicians he has gathered to support him for the tour are simply excellent at their jobs. The musicians looked smart, all in various outfits of black, and serious about the performance taking place. There was no balking from playing music from the first take Sparkadia’s album Postcards, and I was delighted to hear the familiar tunes of “Animals” and “Too Much To Do” sound as good as, if not punchier and tighter than the first time I had heard them played live.

The highlight of the evening came as guest gospel singers took to the stage to assist the band in belting out “Mary”, easily the best song from the new album, though there are many great tracks to choose from, and helped give the sound the haunting edginess for which Sparkadia is known. The excited energy that filled the room built to breaking point as Burnett reservedly crooned the first lilting lines and then burst at the first chorus as the crowd sang as one along with the band. It really was Alex Burnett’s moment, and as he hit the final key change there was a feeling of pride for the accomplishment of rebuilding his band and a gratitude for his passion and commitment which had been the deciding factor in whether this night, this tour, this album would have ever existed.

The set was finished with a beautifully played “China”, and then the inevitable encore with “Jealousy”. The band, Burnett in particular, left the stage with the manner of men who had worked hard and rightly deserved the long lasting applause offered by the audience. I left the evening reassured, Sparkadia was still the same in essence, even better in sound and, if the look of determination in Burnett’s eye was anything to judge by, would be sticking around.