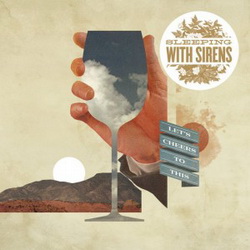 Wow! It is fair to say with Let’s Cheers To This, Sleeping With Sirens have came a LONG way since their first album release, With Ears to See and Eyes to Hear, which was released just last year, and definitely wasn’t the best way to break into the scene. I was ready to give up on the American post-hardcore band, hailing from sunny Florida, however with a deep breath and a strong cup of coffee I was ready to tackle Let’s Cheers To This and boy was I surprised.

Sure, it’s still not amazing, but in only one year Sleeping With Sirens have made astronomical changes, with their once boring and unoriginal sound, which only held up due to the clear potential that was poking through. It was this potential that was definitely bought forward with Lets Cheer To This, and I really hope if the band can come this far in only one measly year, they will have leaps and bound in their musical future.

“Do it Now, Remember it Later” was the album opener and also one of my favourite tracks, an amazing poppy track with a bit of a hardcore edge. The song is insane, like an energiser bunny it doesn’t stop. At all. It is constant, go, go, go with the band and vocals working together throughout the song and the “Whoa oh oh” chorus is hard to resist and not sing along, even after the song is over.

A definite favourite for me was “A Trophy Father’s Trophy Son”, which definitely accentuates Kellin Quinn’s unique vocals, which on the previous album were too high pitched and not controlled appropriately, however here are used just right to produce an amazing track that truly harmonises the powerful instrumentals with long, engaging choruses. Fire, which follows also has similar features that make the album truly come together as an amazing poppy album with a post hardcore edge cutting through.

“Tally it Up, Settle the Score” is the seventh track off of Let’s Cheers to This and the clear winner for me. Loved it. Really can’t say much more; it demands a listen. The vocals are great. The drumming is great. Hell, it’s all good.

Let’s Cheers To This overall, was amazing if you compare it to their previous release that just didn’t excite, to say the least. Sleeping With Sirens have made extreme improvements and revision on their older work and thus have produced a great album. Sure, it may not still suit many tastes or win over masses of listeners, however it is definitely worth a listen and it has restored my faith in the band and I do anticipate future releases.