In one of the upcoming summer’s more captivating tours, Frontier Touring are thrilled to announce that the majestic Simple Minds will team with the party vibes of The B-52s for a huge Australian and New Zealand tour in February 2017.

Both bands, who are much-loved by Australian and New Zealand fans, will play indoor concerts at Melbourne’s Margaret Court Arena, Sydney’s Hordern Pavilion, Auckland’s Vector Arena and Christchurch’s Horncastle Arena as well as roaming Australia on a day on the green winery show dates nationally.

Scotland’s Simple Minds and Athens, Georgia natives The B-52s may be from opposite sides of the globe, but what they have in common is that elusive combination of critical acclaim, cult status and mainstream success, including in Australia.

Australia was the first country in the world to embrace Simple Minds, giving the band its first ever hit single ‘Love Song’ and first Gold album New Gold Dream (81-82-83-84). The love affair has continued ever since through countless chart-toppers like ‘Don’t You (Forget About Me)’, ‘Alive and Kicking’, ‘Promised You A Miracle’, ‘Glittering Prize’ and ‘Waterfront’ spanning eight Top 20 albums and hugely successful concert tours.

‘Big Music is the genuine article: a remarkable record that can stand shoulder-to-shoulder with any of Simple Minds’ first five albums.’ –
Record Collector ★★★★

‘One of the world’s great live bands’ – BBC

After touring Big Music extensively, and buoyed by the record’s success, Simple Minds are currently working on a new album. They will be back on the road in 2017 with Australia one of their first ports of call, having not toured here in four years. Throughout their lengthy career, the band has retained its enviable reputation as one of THE great live concert bands.

“It’s been said Simple Minds has a love affair with Australia and I think that’s true. It was the first country anywhere in the world to give us success and from our very first tours, we’ve always had a wonderful bond with Australian audiences. We have so many fantastic memories and can’t wait to be playing there again.”

When The B-52s – Fred Schneider, Cindy Wilson, Kate Pierson and Keith Strickland – toured Australia for a day on the green and indoor shows in 2009, the response was over-the-top! Irreverent and hugely entertaining, the band’s cosmic appeal was irresistible.

‘Who else offers helium-voiced go-go girls, a camp, barking (in every sense) frontman and sprawling sci-fi new wave? Yes, they look and often sound fantastic, with steely surf guitar riding waves of propulsive rhythms to the Love Shack and back.’
– Sydney Morning Herald

‘With their big wigs, wacky tunes and goofball dance moves — all of which sit comfortably within the band’s friendly brand of psychedelia — their credentials as dance-floor favourites are impressive.’ – The Australian

‘There are all the wonderful riffs and melodies which made the B-52s so danceable, so irreverent and so addictive.’ – Your Brisbane

The B-52’s put Athens, Georgia on the musical map with their quirky and unconventional take on the new wave sound of the era. Their irrepressible live shows and massive hits like ‘Rock Lobster’, ‘Private Idaho’, ‘Roam’ and the barnstorming ‘Love Shack’, which notched up eight weeks at #1 on the Australian charts, have endeared them to audiences worldwide.

In January 2013 Keith Strickland announced that he had made a decision to stop touring with the band saying: “I will continue to be in The B-52s – I will just not tour. My barnstorming days have come to an end, but I wholeheartedly support Cindy, Fred and Kate’s decision to continue.”

“It has been seven years since we have toured Australia and we are just thrilled to be returning! Yes – we’ll be coming back to ‘wonder down under’ on an amazing tour with Simple Minds. Come party with us!”

A DAY ON THE GREEN CONCERTS
Simple Minds, The B-52s, Models and Machinations
Visit adayonthegreen.com.au for more information
(not Frontier Touring shows) 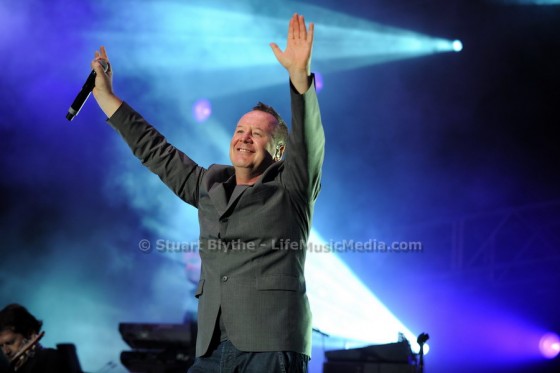