With hundreds of shows around the world, dozens of major international TV appearances and the release of their best long player to date “I Learned the Hard Way” since their last trip to Australia the Dap-Kings have also expanded on stage by way of two of Brooklyn’s finest back-up singers and now present an unforgettable 11 piece soul revue that is hard to top. And the dynamite lady out the front – Sharon Jones is in the finest form of her career. There aren’t many people out there who can claim to have found fame in their 50s, but since her new album I Learned the Hard Way crashed into the US Billboard 200 at #15, Sharon Jones, 54, is fast becoming a bona-fide superstar.

It’s no mean feat when you consider that Sharon Jones & the Dap-Kings release solely on their artist-run, fully independent label, Daptone Records. The commercial and chart success of I Learned The Hard Way follows the 150,000+ sales of their breakout release 100 Days, 100 Nights, while appearances on every major US talk show have cemented Jones and Co’s growing reputation as one of the best live acts on the circuit. Sharon Jones & the Dap-Kings are a real word of mouth success story, built on a reputation for rough ‘n’ ready live shows and the prolific output of gritty studio recordings.

While members of The Dap-Kings have been moonlighting on numerous recording projects with the likes of Sheryl Crow, Mark Ronson, Al Green, Cee-Lo, Amy Winehouse, The Roots, Daniel Merriweather, and others, Sharon Jones has kept busy collaborating on stage, in the studio and on film with David Byrne, Rufus Wainwright, Denzel Washington (The Great Debaters), Lou Reed, Booker T. & the MGs, Michael Bublé, and Phish.

Come December, The Dap-Kings will be back where they belong – providing the musical muscle behind Sharon’s incredible voice when they head to Australia for this extensive Australian tour.

I Learned the Hard Way was produced by Bosco Mann and recorded on an Ampex eight-track tape machine by Gabriel Roth in Daptone Records’ House of Soul studios. The record drips with a warmth and spontaneity rarely found since the golden days of Muscle Shoals and Stax; Sharon’s raw power, rhythmic swagger, moaning soulfulness, and melodic command sets her firmly alongside Tina Turner, James Brown, Mavis Staples, and Aretha Franklin as a fixture in the canon of soul music.

From the lush Philly-Soul fanfare that ushers in “The Game Gets Old” at the top of the record to the stripped down Sam Cooke-style “Mama Don’t Like My Man” at the tail, I Learned the Hard Way is the “Daptone Sound” at its finest. 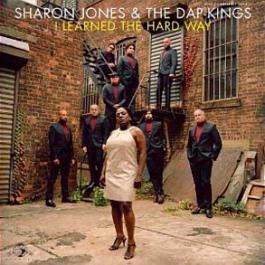