To coincide with the Shadow Thieves CD launch ‘Space Between’ @ Hard Rock Cafe, Surfers Paradise on the 27th August 2010, we have a few copies of the album up for grabs!… See below for details.

Shihad, You Am I, Grinspoon and more. The band was later discovered by Blue Tongue Management, and was included in the 2009 Big Day Out, Loud Fest and Caxton Street Festivals.

Amidst 2009, the band recorded two tracks (‘Promise’ and ‘Mystery’) at Loose Stones Studios with Gold Coast producer, Matt Bartlem. The tracks were mixed by Forrester Savell (Karnivool, Dead Letter Circus). These recording sessions helped develop the bands early ideas into crafted recordings, offering a new direction and a new-found beginning for the band. This new inspiration brought about some serious changes.

The band became ‘Shadow Thieves’ and dissected every aspect of their music from an artistic point of view, further developing their new ‘desired’ sound. The song structure became paramount and in early 2010 the band laid down four new tracks at Loose Stones Studios, this time with producer Shane Graham of Rock Group ‘Fatis Valour’. These four tracks completed the bands long awaited debut release, ‘Space Between’. (Due to be released 24th Aug 2010). Recent performances include one on the Beach at Surfers Paradise (Launch It! Festival) with You Am I and Bertie Blackman, and a performance for Nova FM’s 5th Birthday in Brisbane with Bluejuice, Operator Please & Amy Meredith. Both shows were received extremely well and were successful in exposing the bands new musical direction to a wider music community…

To coincide with the Shadow Thieves CD launch ‘Space Between’ @ Hard Rock Cafe, Surfers Paradise on the 27th August 2010, we have a few copies of the album up for grabs!… See below for details.

Click HERE to go in the draw for a free copy of Shadow Thieves CD ‘Space Between’
Note: Ensure you use a valid email address as the winners will be notified by email on the 17th August 2010. 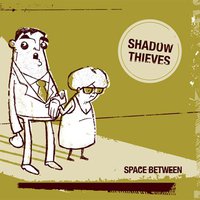