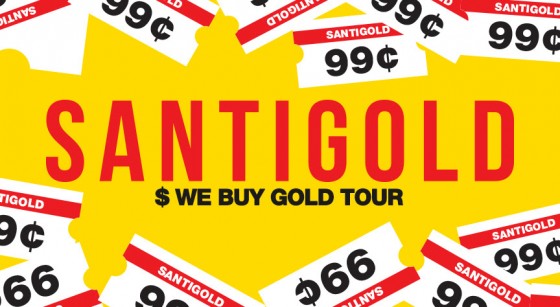 At long last, American singer and producer SANTIGOLD will make her much anticipated return to Australia, playing headline club shows in Melbourne and Sydney in addition to her appearance at Splendour In The Grass this July 2016.

Since bursting into the spotlight in 2008, Santigold has remained one of pop’s most captivating figures. From “Creator” and “L.E.S. Artistes”, her breakout singles, to her latest full-length record, 99 Cents, Santigold’s output has retained an uncompromising and wildly individual edge.

99 Cents explores obsessive consumption, lust for perfection and the ways in which we routinely commodify ourselves. “We have no illusion that we don’t live in this world where everything is packaged. People’s lives, persona, everything, is deliberate and mediated,” Santigold comments. “It can be dark and haunting and tricky, and freak us out, but it can also be silly and fun and we can learn to play with it.”

Santigold has created a glittering, expansive sound on 99 Cents – aptly described by Rolling Stone as “immaculately haute but also playful and warm.” Even at its bleakest, every beat is sugar-coated and every hook is infectious.

Telstra Thanks is bringing an exciting 48-hour pre-sale just for Telstra customers from 10am Tuesday, April 26 until 10am Thursday, April 28. For more information on how to purchase, visit: telstra.com/music.

Also appearing at Splendour in the Grass on July 23