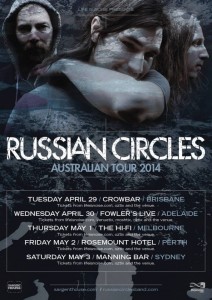 Joining the lineup in Brisbane will be the eclectic metal five-piece The Matador, whose live show is one of the best in the city. Rounding out that bill will be the lush and melancholic ambient duo theseashallnothavethem.
In Adelaide, support comes from fiery metal quartet Valiant Jones. They’ll be joined by the brooding, doom-tinged ambience of instrumental trio Last Days of Kali.

Joining the bill in Melbourne are venerable doom lords and purveyors of all things heavy, Clagg, whose third album ‘Gather Your Beasts’ was one of the standout records of 2013. Meanwhile, on the opposite side of the sonic spectrum will be aural journeymen and master soundscapists Fourteen Nights at Sea.

In Perth, support comes from the always phenomenal Tangled Thoughts of Leaving, who are hard at work on their second record. Joining them will be one of the loudest bands in Australia, doom stalwarts Drowning Horse.

And in Sydney, Russian Circles will be joined by the experimental and cinematic quartet Dumbsaint, whose EP ‘Part III: Celeste’ is out now. They’ll be sharing the stage with fellow Bird’s Robe labelmates, the thunderous and heavily progressive act Mish.

Russian Circles return to Australia this April/May for shows in Brisbane, Adelaide, Melbourne, Perth and Sydney in support of their latest masterwork Memorial.

Hailing from Chicago, the instrumental trio have been spent the last decade crafting their own niche atmospheric and entrancing take on heavy music, pushing the boundaries of what can be achieved with a guitar, bass, drums and lots of volume.

“There are plenty of metal-leaning instrumental bands who dial up big climaxes, but you’d be hard-pressed to find one that creates such an array of textures and emotions with so little.” – Pitchfork

Last here in 2012 in support of their fourth LP Empros, Russian Circles’ live show is something to behold. Brian Cook has one of the most visceral bass sounds you’ll ever hear. Guitarist Mike Sullivan is a master of the looping, building layer upon layer of dense riffs with what looks like effortless precision. Meanwhile, drummer Dave Turncrantz defines the mood, alternating between controlled precision and rhythmic chaos.

On their fifth record, Memorial, Russian Circles push the polarities of their sound, creating a record that’s as reflective as it is unsettling, and cementing the band’s position as legitimate peers of genre innovators like Isis and Neurosis. The valleys are deeper and the peaks higher, and with the addition of synthesizers and strings, the three-piece tap into the meditative territory explored by the likes of Mogwai and Godspeed You! Black Emperor.

“Memorial demands total immersion, but Russian Circles’ sonic world is a welcoming one. Right now, few bands conjure such vital and nourishing food for the imagination.” – The Guardian

Tuesday, April 29 – Crowbar – Brisbane
w/ The Matador and theseashallnothavethem
Tickets from lifeisnoise.com, oztix and the venue.

Thursday, May 1 – Hi Fi Bar – Melbourne
w/ Clagg and Fourteen Nights at Sea
Tickets from lifeisnoise.com, oztix and the venue.

Friday, May 2 – Rosemount Hotel – Perth
w/ Tangled Thoughts of Leaving and Drowning Horse
Tickets from lifeisnoise.com, oztix and the venue.

Saturday, May 3 – Manning Bar – Sydney
w/ Dumbsaint and Mish
Tickets from lifeisnoise.com, oztix and the venue.