It’s a cold, rainy evening in Sydney’s CBD as hundreds stream into the iconic venue to witness a night of musical and at times, personal destruction courtesy of the US band mentioned above.

Their latest disc ‘Option Paralysis’ hit close to the ARIA Top 40, opening up their frenetic cacophony to an ever widening audience that is reflected in the disparate mix of fans queued up to see them live. Black tees, beanies, tatts and flannos… tonight’s performance attracts punters from all corners; in many ways representing the odd line-up of bands playing.

Washington DC band Periphery kicks the evening off with their blend of technical instrumentation and unusual three-guitar line-up. The mix is woeful and the sound guy should hang his head in shame. At times the singer is non-existent and the three-guitar and bass format becomes less of a bonus and more of a curse of auditory mess and confusion.

Despite the audio stew, the crowd is pretty large and enthusiastic; able to scream out song titles from their recent Roadrunner debut album and singing along in parts. Overall the group isn’t particularly energetic given that they’ve travelled around the world to be here, and the singer could do with a good shot of charisma. 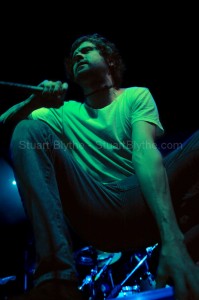 In stark contrast, Maylene and the Sons of Disaster threaten to bring the house down with their blend of southern-fried, at times AC/DC-esque rock and roll. It’s an unusual choice of supporting bands. However, looking at the type of music that DEP perform and the fact that they occupy a genre of one; choosing support acts can’t be the easiest activity.

Maylene… are the antithesis of Periphery when it comes to stage presence – making full use of the Metro stage, never standing still for longer than a moment. Singer Dallas Taylor (formerly Underoath) is a powerhouse, stalking the stage before performing a ballsy front flip into the audience. The Alabama sextet pump out tune after tune of swaggering, Telecaster-infused sing-along rockers with the occasional metallic breakdown for added spice. They’re an impressive live act, but the best of the night is surely Dillinger Escape Plan.

It’s a busy night in the bar as everyone awaits the start of the Dillinger… set. If tattoos were a commodity, there’d be some rich guys and girls in the room. The Periphery guys mingle and shake hands while the female guard at the bar is hit on by every guy that walks passed. She smiles shyly, checking their IDs.

On stage, six 7ft-high vertical light rigs take the place of the traditional band backdrop. It’s minimalist and the perfect representation of Dillinger’s DIY ethos. It’s a capacity crowd and as a deep, mechanical sub-bass note pulses the smoke machines kick into overdrive and the lights dim. The crowd erupts.

From the very first bars, the band are a frenetic live experience. Singer Greg Puciato throws himself into the mosh during the first song; followed closely by guitarist Jeff Tuttle during the second. Dillinger Escape Plan’s live performance is just as chaotic and schizophrenic as their recorded efforts and it’s a joy to behold. Guitarist Ben Weinman sprints around the stage, throwing his black LTD guitar up and down as he plays – somehow never missing a note. Indeed, the group plays with a precision that defies logic, given their tremendously energetic performance.

The band play tracks from their four albums with an emphasis on the two latest, ‘Ire Works’ and ‘Option Paralysis’ – the intensity barely lifts for a moment. Blink and you’ll miss Puciato climbing the ceiling-high speaker stacks – at one time hanging from the lighting rig by an arm and a leg. It’s an all-senses assault that never lets up.

Despite the jagged, jarring nature of the music, bass player Liam Wilson is the love child of Chewbacca and some funky 1970’s soul dancer – grooving his way around the stage with a fluidity and rhythm in seeming contrast to his orange mop of hair and hobo beard.

An hour and ten later, it was all over and the audience cheered their appreciation – almost as tired having witnessed the carnage as the band were having created it. With a capacity crowd, perhaps we’ll have the pleasure of seeing them make a mess of the Hordern stage next time around; spreading the DEP gospel ever farther and wider.