BLKOUT take influence from the traditional New York Hardcore sound and have completed countless runs of Australia, as well as a full European tour. On their new album, ‘Point Of No Return’, BLKOUT lay down by panning towards the unorthodox in their journey to widen the scope of Australian hardcore. Perth’s favourite hardcore sons will be hitting the stage with Refused.

NUCLEAR SUMMER embodies the light and dark, dances between insane technicality and punk rock simplicity, while simultaneously channeling pure joy with unbridled rage. They will be taking their brand of ‘Sunshine Metal’ to the Brisbane show.

ENDLESS HEIGHTS are about taking chances and pushing to achieve what you desire in life. Their motto, “Dream Strong”, permeates every element of the band, and it is this principle that will see them take their personalised brand of melodic hardcore to the Sydney show.

OUTRIGHT are backed by big riffs, hard hits and unstoppable energy. Their distinct passion, nestled within a sea of heavy chords and a progressive social conscience will be in full flight at both Melbourne shows.

HIGHTIME have managed to create a punk rock sound that defies many a genre; yet always carries the raw passion of its hardcore roots. They will be bringing their infectious and energetic live show to Adelaide. 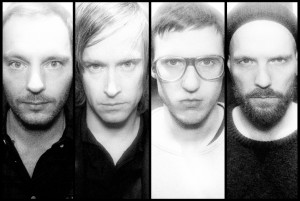 There are only a handful of bands that people regularly talk about never getting the chance to see live. It burns in their soul and gnaws at them incessantly.

REFUSED fit perfectly into the category as one of those legendary bands however on January 9, 2012 they announced to the world that they were indeed… NOT FUCKING DEAD!

REFUSED reunion shows have been stunning fans across the world with Metal Injection exclaiming “There was just pure raw hardcore and another incredible moment of music history!”

Now long suffering Australian fans get their turn. REFUSED are as vital as ever and will be touring this November and as the band succinctly put it…”We don’t know about you, but for us, in 2012, boredom is not on the table. See you in the pit.”