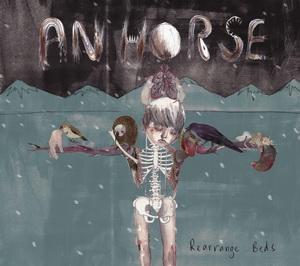 Rearrange Beds recalls in lurid, dreamlike detail memories of adolescent youth; of mistimed love, desperation and a need for just a little bit of control, and as the debut album for Australian two piece An Horse it acts as a solid showcase of the band’s notable talents. It’s honest, edgy and just a little bit off centre and will speak to anybody who remembers that baffling and awkward experience that is emerging into adulthood.

An Horse mixes the best traits of indie pop with quirky subject matters and the courage to take a risk. The duo, made up of Kate Cooper (vocals/guitar) and Damon Cox (drums), keep it simple with most tracks on the album featuring Damon’s drum rhythms below Kate’s striking voice and guitar backing, with the occasional touch of a harmonica or tambourine to brighten things up. This simplicity allows the album a fresh, young sound, showing just what An Horse can do without overcrowding with all the bells and whistles.

What’s nice about the production on this album is that all the anomalies or perceived imperfections haven’t been erased out and it doesn’t have that over-commercial, plastic feel that so many young Australian bands are being branded with these days. Similarly, they have managed to strike a good balance between sounding overtly and deliberately Australian and sounding blandly regional, the distinct sound this gives them perhaps accounting for some of their quick success overseas.

It’s clear that Kate Cooper enjoys creating her cleverly strung together lyrics, and the songs on this album can be uplifting, confronting and thought provoking simultaneously. The anthem-like chorus of the first track, “Camp Out”, “It’s okay to fall down/It’s okay to crumble/I’ve seen this before, I have seen this before” leaves the listener with a sense of determination, camaraderie and courage. Songs such as title track “Rearrange Beds”, then, show Kate’s more poetic writing attempts, with the inclusion of provoking and vivid imagery and metaphor. Though perhaps bordering on having meanings a little too well hidden, lyrics such as “Aches that sail like ships through cartilage you never did anything to/For some reason it wants you to know it’s not so happy with you,” (Rearrange Beds) have a deep sense of the melancholy and youthful ignorance that seeps from this album and show Kate’s varied use of the English language.

While they have received some criticism for including all five of the tracks from their 2008 EP Not Really Scared on the new album, An Horse’s recent release of five extra tracks which make up Beds Rearranged (to be bought alongside the record) add a welcome diversity to the band’s sound. While Beds Rearranged contains remixed versions of five of the songs already on the album, they are definitely a positive addition to the original tracks. Rather than drawing out the album, these tracks add some excitement and spice and above all, show that An Horse’s songs can work as well in a more upbeat, commercial setting.

Yes this band has room for improvement and yes, they’ve still got a lot of hard work ahead of them, but following the release of such a quality first album, An Horse is one band that looks like it can last the distance. They’re new, they’re exciting and best of all they don’t look like giving up anytime soon. This album makes for a good, solid start to what is hopefully a long lasting career.