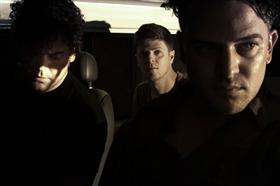 As is the rule with The Zoo on school nights, there’s only a handful of people inside the room by the time AXXONN – aka Brisbane electronic music artist Tom Hall – announces his appearance by producing a series of bleeps from his keyboard and laptop. Not deterred by lacking crowd numbers, he quickly fills the sonic space with heady drone-electro, hitting one cutting, heavily-sustained synth chord after another. As the kick drum gets more insistent and bassy, the lucky few listeners in the room begin to “get into it”, rewarding each track with progressively louder applause. Hall’s one-man show may not involve much antics to ensure an enthralling viewing experience, but the music itself makes for an excellent listen.

Counting a drummer among them, Sydney trio Seekae utilise a record three MacBooks (Kraftwerk, from my recollection, don’t use Macs) to create their own, unique laptop symphony. Densely-processed vocals occasionally interject the ambient soundscapes and intricate beats that at times recall celestial Melbournians Mountains In The Sky and when the shuddering, dubstep-ish sub bass finally kicks in, it becomes hard not to head-nod. Add some well-chosen 8-bit sounds and you’ve got the second excellent support set of the night.

Having spent many months overseas, Australia’s own math-rock champions PVT (who we all knew as Pivot before some American metal band intervened) are in town to launch their new album Church With No Magic – and instantly submerge the by-now decent gathering in “new stuff” by opening with Timeless and the title track. Frontman Richard Pike and laptop whiz Dave Miller as ever put on a great show, relentlessly flailing to the music, while skinsman Laurence Pike hits the drums with the same unbridled force. But still, there’s something about their performance that prevents it from being mind-blowingly good, with the so-so mix not helping either.

Cliched it may sound, however it’s the trio’s older, instrumental material from 2008’s splendid debut O Soundtrack My Heart – namely Didn’t I Furious, In The Blood, Fool In Rain, Sweet Memory and the arresting title track (which they air in all its glory during the encore) – that retains the melodic punch we grew to love. Likewise, tonight isn’t the Sydneysiders’ greatest gig – that would have been any of the three Pivot ones I’ve previously witnessed: at the same venue nearly two years ago, at 2009’s Laneway and when they supported electro-industrial overlord Gary Numan at The Tivoli. It’s not by any means an average display, of course: Pike is a thoroughly compelling singer, the band’s musicianship is on the money and from CWNM, the languid Crimson Swan and single Window work just as well live as they do on a record.

Perhaps it’s mostly up to the listeners to adjust to the new Pivot… sorry, PVT tracks in a live setting as well as give the new record time to grow.