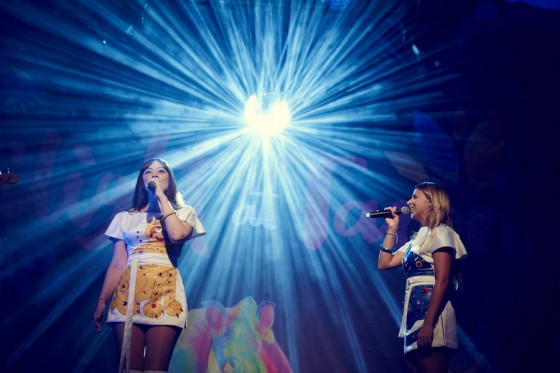 Twilight at Taronga presented by ANZ delivered another show-stopping weekend of music amongst the spectacular backdrop of Sydney harbour, with audiences treated to two sold out performances from Björn Again over Friday and Saturday, and Tex Perkin’s Far From Folsom tribute on Sunday.

Crowd favourites Björn Again made their return to the Twilight stage for 2016, bringing their world-renowned and critically acclaimed ABBA tribute show to Taronga Zoo on Friday and Saturday night. Performing against a stunning golden sunset, Björn Again lit up the stage in their outfits reminiscent of the bold and glitzy time of the Swedish pop group’s prime, and had the entire sold out amphitheatre singing and dancing along to ABBA’s best-loved hits of the 70s and 80s.

On Sunday night, Tex Perkins transformed the Zoo into Folsom Prison with his Johnny Cash tribute. Supported by Vic Simms whose charisma and energetic dance moves warmed the stage, Tex Perkins captured the attention of the audience as he incarnated “The Man In Black” in equal parts charm and swagger. The crowd toe-tapped along to a rousing performance from Perkins,’ who brought rock n’ roll classics to life with singer Rachael Tidd and his band the Tennessee Four.

Only two more weeks remain for the 2016 Twilight series, with tickets on sale for two of the remaining four shows. Don’t miss “what can only be described as a perfect Sydney eve on the Harbour” (Zan Rowe, triple j) and secure your tickets to Colin Hay and C.W. Stoneking performing this March.