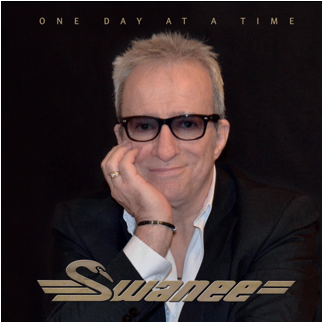 When John Swan sings, “I’ve travelled far … seen it all … had my share of tears”, you know they’re not throwaway lines. He’s lived it.

Swanee has led a remarkable rock ’n’ roll life. Some kids dream of running away to join the circus. When Swanee was 13, he ran away with a rock group, moving from Adelaide to Melbourne with a band called Happiness.

John Swan has been making music ever since, though it’s been a bittersweet journey. He’s topped the charts, had some great times, but also battled drug and alcohol problems. If you want to understand Swanee’s story, all you have to do is listen to his new album, One Day At A Time.

“I used to write over-the-top rock lyrics,” Swanee says, “songs about cars and girls and drinking. That used to be my life. But now I’m walking a different path.”

One Day At A Time is the tale of a man who’s come back from the brink, an artist who’s lived to tell the tale. “My past eventually caught up with me,” Swanee says simply. “I needed to go off the road and re-group. I got rid of all the bad stuff, and I rediscovered my love of music. “I feel like I’m 13 again.”

One thing hasn’t changed – Swanee is still one of Australia’s finest singers.

“Swanee is one of the greatest singers I’ve ever worked with. The notes he can hit are simply unbelievable. And you won’t find a nicer person in the music business.”
Mark Opitz, producer (“If I Were A Carpenter”)

One Day At A Time is an album with a sense of humour, but it’s also brutally honest. As Swanee confesses in “Heart Run Dry”, “I know a lie because I’ve told a few.”

“Like all great rock singers, John Swan imparts an emotional connection with the song. Whether he’s belting out a rocker or getting inside the lyric of a ballad, he is totally believable.”
– Billy Pinnell (3AW, 3RRR)

Swanee has had a string of chart hits, including If I Were A Carpenter, Temporary Heartache, Lady What’s Your Name and The Party Boys’ number one smash, He’s Gonna Step On You Again.

He’s always been obsessive about music. A record producer once told Swanee, “You shut up and sing and I’ll make you sound good.” Swanee walked out of the booth, punched the producer in the face and left.

Swanee is headstrong and passionate. His younger brother Jimmy Barnes recalls that Swanee would wear a kilt to school – “so other kids would pick fights with him, so he could belt them”.

Swanee has now found a balance in his life.

On the title-track of his 2007 album, Have A Little Faith, Swanee sang: “All I ever wanted to be was a rock ’n’ roll star.” Mission accomplished. “Now,” he says, “I just want to be accepted as a musician.”

Swanee discovered the true power of music when he made the biggest decision in his life – to quit drinking. “I was very sick,” he admits. “I’m grateful to still be here and making music.” Swanee is dedicating his life and music to helping others. He is co-founder of the Autism Music Fund, and is an ambassador for the Salvation Army, as well as the Music Matters program, where he plays for patients as therapy.

“Growing up, my older brother John Swan was my hero. He is a classic, a one-off. Swanee had the strongest influence on my musical career.”
– Jimmy Barnes

The album is a thrilling trip through all of Swanee’s musical loves: soul, gospel, blues and rock. There are some beautifully nostalgic moments, including the breezy Summertime and the ’50s-inspired Say Goodnight, but this is an artist who’s very much living in the moment. The album concludes with a stirring farewell song, Here’s To You. But as Swanee sings, “This is not the end.”

The strength of these songs suggests this is the start of an exciting new phase in Swanee’s career.

“I had 10 years working on my drug and alcohol problem,”. “I’ve now been clean and sober 13 years. And proud.” One Day At A Time. John Swan

One Day At A Time was produced by Darren Mullan. “He deserves so much credit,” Swanee says. “He made my job really easy.” Swanee wrote all the songs with Darren, and the album also showcases the stellar playing of ARIA Award-winning guitarist James Muller (just check out the searing guitar work that opens the album).

Presales from May 20. Order at www.swanee.com.au
Hear the album
https://soundcloud.com/albert-music/sets/john-swan-onedayatatime