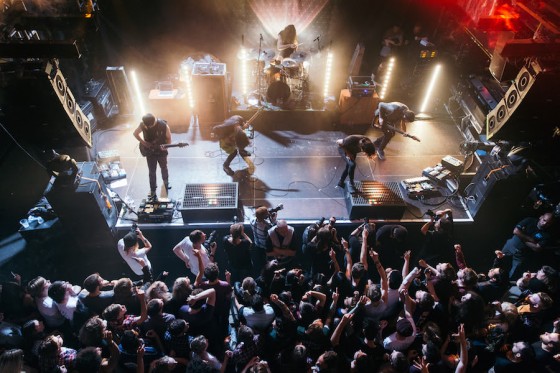 Northlane have put their own spin on a cover version of Tame Impala’s ‘Let It Happen’. The cover was recorded on the road on the current European headline tour which has seen the band sell out four shows in the UK, Paris and Germany and record a live set at the legendary BBC Maida Vale Studios. The studios are best known for the John Peel Sessions which included live session recordings by artists such as The Beatles, Led Zeppelin, Jimi Hendrix and David Bowie. The headline European run finishes this week and the band head home immediately to begin their national Australian tour in support of new album Node, which debuted at #1 on the ARIA chart earlier this year. The tour kicks off on Wednesday November 4 in Perth and sees the band play nine shows around Australia.

Guitarist Josh Smith explains the choice of cover, “We’d been wanting to do a cover for quite some time but because we all listen to fairly different music, we could never come to any sort of conclusion about what artist or song to choose when the conversation came up. Then one day Jon came to a rehearsal with the first minute of this as a rough demo on his phone to show us and it clicked. Tame Impala might seem an odd choice for a cover from us, but it’s a band that has a fairly similar writing process, and a few common threads within their music and lyrics.
We were planning to record this cover during our live session at BBC Maida Vale the day of our show in London, UK earlier this month. Unfortunately we ran out of time quickly in the studio as we had to head out early to play the show. We’d already worked on developing this song and rehearsing it and didn’t want that to go to waste, so we chose to do our best to polish up the demo on a laptop while we’re out here on the road in Europe. After this ordeal we’re glad this cut can finally see the light of day, enjoy!”

Running throughout November, this will be the band’s first Australian headline tour in 18 months. The Node tour also includes August Burns Red (USA), Like Moths To Flames (USA), Buried In Verona and Ocean Grove. Last playing to Australian audiences during Groovin The Moo earlier this year, the Node tour will be the first Northlane headline shows since the highly successful Free Your Mind tour in May 2014 and also the first domestic headline performance for new vocalist Marcus Bridge.

The Node tour is the culmination of a well-documented transformation for the band. Against all the odds, they discovered a vocalist that personified their ability and passion to take them to the next level. Marcus’ addition to the band not only reinvigorated everyone involved, but finally allowed them to create an album that they had long aspired to make.

Node was revered by media around the world and the admiration echoed in Australia with feature album on triple j, a guest host on iconic ABC television program Rage, two Blunt Magazine covers and an ARIA nomination for Best Hard Rock/Heavy Metal Album. 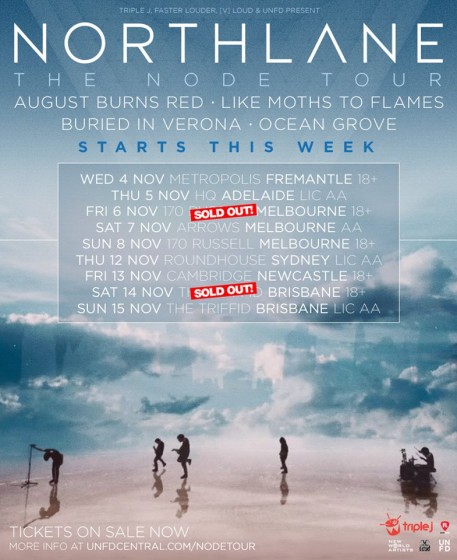