· Bands and filmmakers register (for their respective city – Sydney, Melbourne or Brisbane)
· They are then paired up randomly and given just THREE days to create, shoot, edit and submit a music video.

There are stacks of prizes to be won including the winning clip playing on Video Hits, PLUS a representative from the winning band and filmmakers will be flown to the Video Hits set to be interviewed on air!

There’s also awards specific to your field, all details to be announced.

The Competition – How it all works

Simply head to www.mvmu.com.au to register as a filmmaker or band. Registration covers your team’s entry into the competition, entry into the National Awards Gala and a bag of goodies to help you through the weekend. Please be aware that places are limited so its first in best dressed. $150 regular registration is available until May 15th.

At launch nights in respective cities on Fri June 10th teams will be paired off randomly (check website for locations) and the 72 hour’s start’s immediately. Once finished, clips are submitted and judged by a panel of industry experts across a number of categories (judges include the likes of Video Hits Executive Producer, Rachel Moor).

All clips submitted will be screened at screening nights in their respective cities:

There will also be networking nights in each city where potential filmmakers and bands can come along, meet other competitors, ask questions to the organizers and listen to some local live music while having a couple of drinks. Dates and details TBC.

Prizes
Details of over $10,000 worth of prizes across over 15 different categories will be announced next week. Winning clip will be played on Video Hits and a representative from the winning band and filmmakers will be flown to the Video Hits set to be interviewed on air. The winning band will receive a showcase spot at Bigsound 2011, one of Australia’s biggest Music Industry events, PLUS passes for the whole band to attend the conference! Filmmakers will receive passes to SPAA Fringe Conference too!

Keep an eye on www.mvmu.com.au for details 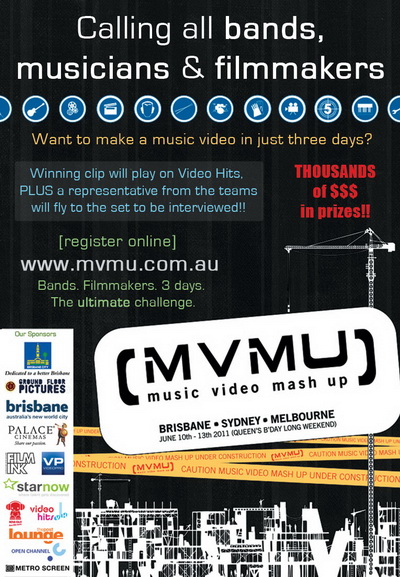