Main support in each city will come from two-piece hell raisers King Of The North. Since exploding onto the Melbourne music scene in early 2012 this guitar/drum duo have had punters and pundits alike raving about their massive sound and killer live shows. Pioneering the 3 from 1 guitar technique (making the sound of 2 guitars plus a bass guitar simultaneously from just one guitar), first timers are often left looking for the extra guitarists amidst the wall of sound. Add to the equation one of the most dynamic and solid drummers around and you have a rock n roll band like no other and one of the country’s most exciting new acts.

Along with King of The North, Monster Magnet will also be joined by hard rock punks Chainsaw Hookers in Perth and psych stoners Fort in Brisbane. In Sydney stoner rock disciples Arrowhead will start the proceedings and for a special treat Matt Sonic & The High Times & Don Ferndando will help take the Melbourne event into the stratosphere! 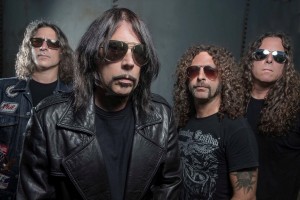 Administered by high priest and founder Dave Wyndorf, Monster Magnet have spent the last quarter of a century free-pouring a righteous mix of mind-bending 60’s sound, heavy drug ‘n’ fuzz 70’s riffage and lashings of infinite psychedelic space rock. Across nine albums including the classics Superjudge, Spine of God, Dopes To Infinity, and their most recent release Last Patrol, Monster Magnet have turned on a legion of fans across the globe. In 2014 Monster Magnet will return to blow minds across Australia, bringing their biggest hits – and for the first time, live cuts from their latest album, Last Patrol!

Monster Magnet formed in 1989; fusing a template born of metal, punk, space rock and psychedelic influences. The band soon developed a sludgy, feedback-heavy hard rock sound that helped them stand out from the era’s burgeoning retro-rock movement. After signing with independent label Caroline Records in 1992, the band recorded its first full-length album: the very impressive, uniquely dark, psychedelic masterpiece “Spine of God”. A support tour with the then fast-rising Soundgarden helped attract the attention of A&M Records, who would issue MONSTER MAGNET’s stellar major-label debut “Superjudge” in 1993.

With 1995’s “Dopes to Infinity”, Monster Magnet would achieve interstellar overdrive, becoming international superstars. Recorded at The Magic Shop and Electric Lady Studios in New York, the album yielded the top-ten rock single “Negasonic Teenage Warhead”, still a staple of the band’s live set. The record’s massively successful follow up — 1998’s “Powertrip” — unleashed the singles “Powertrip”, “Temple of Your Dreams”, “See You In Hell”, and the hugely successful “Space Lord”, all of which received substantial rock radio airplay. Two years worth of world tours with the likes of Aerosmith, Metallica, Rob Zombie, and Marilyn Manson made Monster Magnet a household name.

Of the band’s latest release Wyndorf relates: “Last Patrol is a return to our roots in terms of vibe and recording style. It’s full-on psychedelic space-rock with a 60’s garage feel, recorded almost exclusively with vintage guitars, amps and effects in our hometown of Red Bank, NJ. The songs are a kind of Space-Noir, tales of cosmic revenge, peaking libidos, alienation and epic strangeness. It’s a weird trip through the back alleys of a dark, retro-future, which not by coincidence very much resembles my own life.