If you’re trying to work out what style ‘Mondo Cane’ represents, think 1960’s lounge music and styles more grand, often made famous on films of the time. It’s dramatic, fluctuating and classic. However, Patton instils his own signature on the pieces with touches like tinny, surf music-style tremolo guitar parts. It’s as quirky as it is catchy.

The accompanying press release quotes Patton as explaining, “My purpose in revisiting these pieces is not to relive the past, not for nostalgia, but more to illustrate through modern and adventurous interpretation exactly how vital and important this music still is.” This is highlighted by his choice of the track ‘Urlo Negro’: a late ‘60s song about the civil rights struggle of the time.

For Patton fans, ‘Mondo Cane’ will be a must-have; just as it should be for anyone else wishing to expand their musical palates. Whether you’re into rock, metal or pop; you’ll probably be just as challenged with this release as anyone – however perhaps not as much as by Patton jems such as ‘Adult Themes for Voice’.

Definitely worth the listen.

– Buy: Faith No More from iTunes 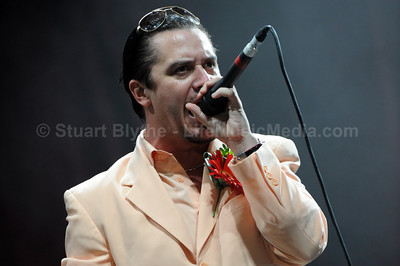