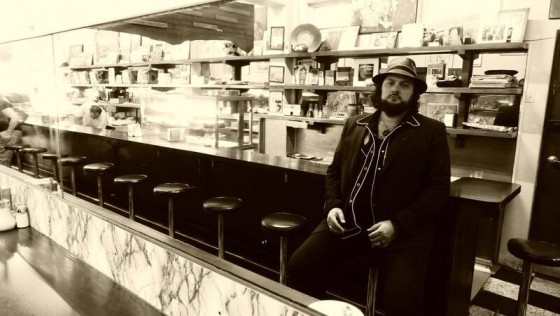 After 15 years, 7 full length albums, over 1000 shows all over the world, and a new addition to his young family, you’d be forgiven for thinking that Australian blues/roots musician Mike Elrington might be tempted to slow things down some, even just for a little while.

But, with the release of his first completely acoustic LP, Two Lucky Stars and an East Coast tour announced, that’s clearly not the case.

The album was produced by ARIA-award winning Peter “Reggie” Bowman, and features the talents of Chris Wilson on vocals and harmonica, Roderick McLeod on drums/percussion, Catherine Quirk and Michelle Meehan on Violin and Cello and extra vocal duties from June Harrison, Chase Bowman and Michelle Meehan.

Elrington has captured his triple-threat prowess perfectly on this release. Not just with the booming vocals and blistering guitar playing he is well-known for, but also with some incredibly personal and sometimes confronting songwriting.

Two Lucky Stars is 14-track snapshot of some of Elrington’s finest work to date. The big man of Australian blues music has crammed a stack into his 30 plus years so far, but the best surely lies on the horizon for this talented singer/songwriter and terrific live performer.

‘TWO LUCKY STARS’ IS OUT NOW ON ONLY BLUES MUSIC