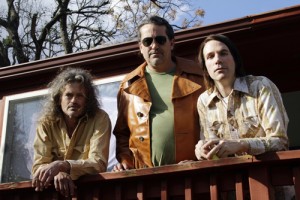 Brant Bjork rises from the Californian Desert to co-headline CherryRock014, beside the legendary Meat Puppets. Also added to the final line-up are High Tension and Powerline Sneakers.

And because of the 108 Flinders Street residential development and new Peruvian restaurant at the base of ACD/DC Lane, this must be the final CherryRock Festival as we know it!

Brant Bjorkis revered for his impeccable stoner rock pedigree in KYUSS and Fu Manchu on drums. Brant Bjork has taken lead vocals and guitar via the Californian Desert to a new transcendental high on his seminal stoner albums ‘Somera Sol’, ‘Punk Rock Guilt’ and ‘Gods & Goddesses’. The man is an icon and is as cool as a cactus in the midnight desert.

—-
Playing their first show in Australia in over twenty years Meat Puppets will headline CherryRock014 in AC/DC Lane this year.

The Kirkwood Brothers were made famous when just 138 days before his tragic death in 1993 Kurt Cobain invited them to perform with him on MTV Unplugged and Nirvana covered three classic Meat Puppets’ songs, ‘Plateau’, ‘Oh Me’ and ‘Lake of Fire’.

Originally from Phoenix Arizona Meat Puppets massively influenced Nirvana, Pavement, Soundgarden and Dinosaur Jr. being notables on the famed SST Records roster, and although they started as a punk rock band they evolved a style of their own that blended punk with country and psychedelic rock punctuated with Curt Kirkwood’s unique vocals. To this day their rare live shows are the stuff of legend!

CherryRock014 Melbourne is the 8th CherryRock street rock n’ roll festival and will take place in AC/DC Lane and Cherry Bar from 12noon till 9.30pm on Sunday 25 May with 13 acts playing across 2 stages with no clashes. Other confirmed first-round acts include Chris Russell’s Chicken Walk, King of The North, Beastwars (NZ), Drunk Mums, Child, Bitter Sweet Kicks, The Harlots and Don Fernando.

Cherry Owner and Booker James Young reflects poignantly, “The new residents of 108 Flinders Street move into their 189 apartments overlooking AC/DC Lane in the first week of June, so we wanted to host our biggest and best CherryRock street rock n roll party in the last week of May. As the Rolling Stones’ sing “This could be the last time, maybe the last time, I don’t know…”