When I walk into King’s Cross’s packed Melt Bar on the night of the show I’m surprised to learn that the person on stage is, in fact, Mr Daniel Lee Kendall. Not quite was I was expecting. He’s a low key kind of fella in his blue jeans, flannie and thongs. I soon discover that his music is similar, with a little added quirkiness and charm. Fans of the NSW Central Coast lad will hate me for saying this but DLK has a real Pete Murray vibe about him. Acoustic, mid tempo rock songs questioning where it all fell apart, sung with the trademark Aussie drawl. It’s just the man and his guitar with a stomp box at his feet. Occasionally he hops over to the keyboard and adds some programed beats, as well. Then, out of nowhere, comes a stripped back, acoustic cover of Passion Pit’s ‘The Reeling’. It takes a while for punters to catch up and recognise the song. I like it; no one was expecting that! He finishes the set with the tune I’ve been waiting for, ‘Lost In The Moment’, complete with a whistle solo.

Tonight’s crowd is an interesting one. As they all move forward in preparation for Mr Matt Corby’s performance I scan their faces. Your mum’s here, so is your kid sister. Standing next to her is that guy from uni, the one who cuffs his chinos and wears brogues without socks. There are clearly a few young’uns holding onto the Australian Idol days but as Corby takes to the stage it’s obvious those days are a distant memory. As he begins to strum his guitar all chatter ceases, glasses stop clinking and, as the saying goes, you could have heard a pin drop. I haven’t heard silence like this at a gig since Bon Iver played the Tivoli early last year. At first, Corby’s vocal delivery does in fact remind me of Bon Iver’s ‘Justin Vernon’: the falsetto, the rise and fall in volume from a soft whisper to an intense, soul-bearing yell. But then in proceeding songs he reminds me, vocally and musically, of Marcus Mumford then Jeff Buckley.

Comparisons aside, Corby is enchanting and commanding and something altogether remarkable. He mainly sticks to acoustic guitar and is backed up on vocals by his band, but at times he moves over to the keyboard while the bass player picks up a trumpet and the girl on keys switches to bass. A talented bunch! Tonight’s gig has the official aim of launching Corby’s latest EP, Transition to Colour , but he doesn’t dwell on it or plug certain singles. Word is he’s signed to the Communion label which is run by Ben Lovett of Mumford and Sons. Apparently he spent last month in the UK recording a full length album with the label. Corby’s definitely running with the hunted and as Marcia Hines said back in the Idol days (apologies, I couldn’t resist!) an artist with true substance. 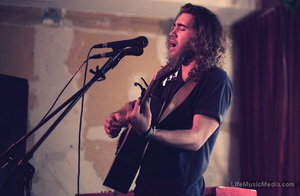