“Bad Touch” in all but name – in this era, any cheesy ’90s reference, whether purely coincidental or not, is likely to get a jolly response.

Last time Manic Street Preachers played Australia – skipping Brisbane – was over ten years ago, so the crowd’s welcome can’t possibly be any heartier. As soon as the eardrum-bursting noise subsides, the Welshmen launch into a fierce Generation Terrorists stomper “You Love Us”. A guitarist and vocalist of rare power, frontman James Dean Bradfield is a machine both behind the mic and on his trademark white Les Paul Custom; the “Wirestarter” – beanpole bass player Nicky Wire – rocks the glam/yacht-rock look (and a boa-covered mic stand to boot) with gusto and sticksman Sean Moore works the drums like an engine.

From 2007’s decent, but not great Send Away the Tigers, “Your Love Alone Is Not Enough” goes down a treat and a majestic early highlight Motorcycle Emptiness – voted the Manics’ all-time best song – sends goosebumps all around. T he opening track of new LP Postcards from a Young Man, (This Is Not War) “Just The End Of Love” retains the old one-two punch, with “Some Kind Of Nothingness” and “Golden Platitudes” (both of which are performed later in the set) hardly being shabby either. The first surprise of the night arrives in the shape of Gold Against The Soul’s “Roses In The Hospital”, whereas the ebullient Australia is quite an apt inclusion and The Holy Bible’s sole moment of calm “This Is Yesterday” is beautiful to say the least.

Original lyricist, guitar-holder and overall tragic figure Richey Edwards hasn’t been with the band since his still-unresolved 1995 disappearance – and duly gets a double tribute in the shape of the demon-exorcising “Everything Must Go” and “You Stole The Sun From My Heart”. One of the few gems from 2001’s patchy Know Your Enemy, “Ocean Spray” makes many neck hairs stand with its sonorous trumpet break, while the Manics’ first UK Top 10 single – a crunchy arena-rock cover of M.A.S.H. theme “Suicide Is Painless” – is a song that practically requires a plethora of raised lighters. The band’s sneering first 7” “Motown Junk” – is coupled with their first UK #1 – the “Spanish Civil War” -themed “If You Tolerate This” (Then Your Children Will Be Next); afterwards, Bradfield performs a jaw-dropping acoustic rendition of This Is My Truth, Tell Me Yours’ elegy “The Everlasting” as his compadres wait backstage.

Summoning another decibel-blasting cheers torrent, the Manics return and obliterate the house with The Holy Bible’s seething “Faster” and Everything Must Go’s crunchy closer No “Surface All Feeling”. A moment of down-to-earth warmth is had by all when the keyboard player stuffs up Tsunami’s koto-like intro, and the anthemic singalong “A Design For Life” provides a stadium-sized ending to one of 2010’s best rock gigs. This IS their truth. 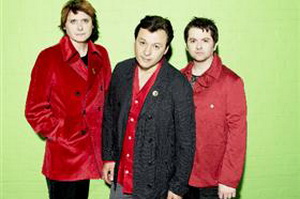