These songs represent a fascinating journey, from when he immigrated to America in the late eighties, to the present day.

I’m allergic to nostalgia. Long nights reminiscing about the good old days are a bit of a yawn to me. Much more excited by the good now days, the next song, the next gig, the seed of the next record…. And yet, perhaps it’s ok to press the pause button for a moment, and reflect a tiny bit on experiences over a period of time. Not dwell too long; just feel it again, pay respect to the places and the people. Say thank you to life for bringing me here. Say thank you to all the people who have shared the journey so far.

It was in the Colony restaurant in Dublin in 1986. I played there once a week. It was one of 3 or 4 residencies I was doing in Dublin at that time. After 3 records and no real progress – yet I felt something in the new songs, something in the sound I was making, that drove me to believe, if only…..

That night in the Colony, there were 4 people at 2 tables. 2 couples. I sang my heart out for 2 hours; old songs, new songs, gave it everything, as always. When finished, one of the men at a table asked me over to say hello. His name was Michael Jaworek, and he was honeymooning with his wife. Michael was, and still is, a much respected promoter in Washington DC. He gave me his business card; the first time anyone ever gave me such a thing, and told me he would get me a gig anytime I wanted to come to America. This simple moment lit a little spark within me. Hope

So many people were struggling in Ireland. It was unbearable for any of us to leave family, friends, and familiarity. None of us wanted to go. But what was the choice? I joined the ranks of Irishmen and women taking the boats and planes in search of possibility. In the late ’80s there were 100,000 of us in New York alone.

In heading to America, I also chose to acknowledge the utter newness of this adventure, by taking on a professional name, Luka Bloom. Hey, why not? This is for the songs. Lets see what’s out there. It felt like the last throw of the dice. ‘Hi, my name is Luka Bloom. I’m over from Ireland, and would love to sing in your club’. This was my introduction to the music world of Washington DC, New York, Boston, and Baltimore. Up and down the east coast on the Amtrak train. ‘ALL ABOARD”! Indeed.

It was terrifying for a young man from the plains of Kildare; and it was utterly fantastic. I realised one day that New York was as shocking for a man from Iowa as for a man from Kildare. I told myself to take a chill pill and give it time. It began to feel familiar. I walked and walked for hours, endlessly fascinated and thrilled and exhausted and scared and overjoyed. Some of the clubs had acts performing from 8pm until 4am every night, a new act every hour. I deliberately worked the midweek nights, to build up my own crowd, and little by little it began to happen.

Over a period of 2 years the people in the Village took me in. They minded me. They said thank you for bringing us these songs. And I began to experience that which is a cliché to many, but the reality for so many of us; a sense of hope and belief that maybe there is a place in this world for these songs. And it started in New York.

In one intense period in early 1989 I met the people who became my managers, booking agent, record company, publishers for the next 5 years. Suddenly, life was different. Everything changed in 1990 with the release of RIVERSIDE. Calls came in from Australia, Holland, Belgium, Germany, Swizerland, The UK, and of course, Ireland. Those days in New York changed everything. They opened the door to the world. It still amazes me.

Luka’s appearance at the Pink Pop Festival in the Netherlands in 1991 is considered the start of his breakthrough in Europe. In 1992 Luka headed down under for his first extensive tour of Australia. His love affair with Australia had begun. He says “…in truth, I spend 2 months out of 24 in Australia and the next 22 waiting to return….”
Luka has been touring the world constantly since and in between recorded his much awaited 14 albums including Salty Heaven, Keeper Of The Flame, the highly acclaimed Eleven and now Dreams In America.

Luka’s live performances are summed in his own words – “Every gig is precious. Whether the Spa in Lisdoonvarna, Carre in Amsterdam, or the Enmore Theatre in Sydney, the privilege is the same, as is the commitment to the gig.”

Life is good. See ye down the road,
Luka 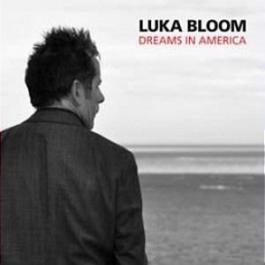