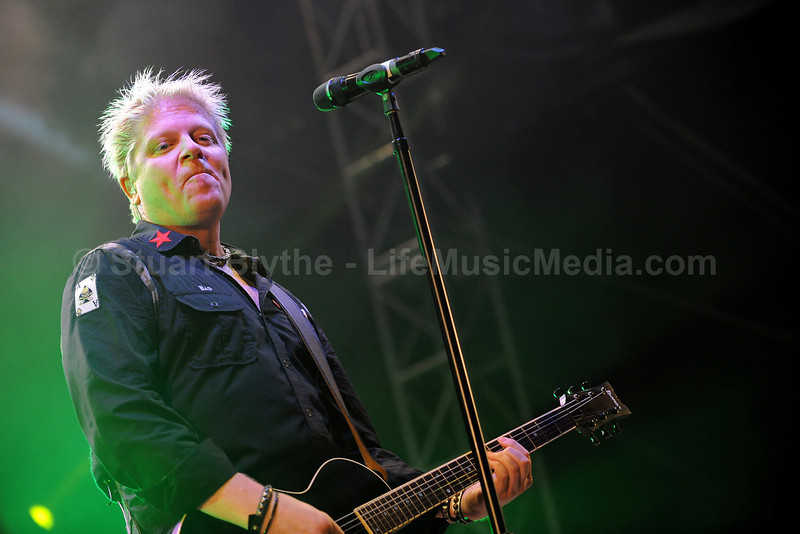 Arriving at Barangaroo the place was littered with many hopeful bodies ready to witness the return of the Vans Warped Tour to Australia. Though Barangaroo came off as a little small for such as huge festival, the venue was exceptionally prepared, with easy access to all amenities & better yet a bar area that had a great view of both the main stages.

The Summer Set welcomed everyone on the main stage, hyping the crowd with their energetic pop rock, preparing them for an enthralling day filled with both diverse and unique acts. Some veterans of Australian shows and others approaching our shores for the first time, the day was filled with opportunities to witness great acts and due to thoughtful timetabling, there was little chance of a clash between acts of the same genre.

As the heat began to beat down and keep many people static, both The Dangerous Summer and Man Overboard competed to outdo the other, both putting on strong shows that revitalized many dormant fans just in time for Tonight Alive to take the main stage. There was a lot of love for Jenna as she dominated the stage with her powerful vocals, cementing this female lead amongst the male dominate lineup.

Many young fans broke off from this performance to see Canberra natives Hands Like Houses but due to equipment problems, the band was unable to perform their set. Instead, both Trent & Alex gave an impromptu solo set surround by fans outside of the stage, singing along to familiar hits. It was encouraging to see the commitment the band has to their fans.

As mentioned earlier the venue was small but it did allow for fans to run into band members during the course of the day. The likes of Brett from Buried In Verona and Andy from Crown The Empire were just some of the artist casual walking among the crowd, taking photos and signing the plethora of objects passed to them.

Around the midpoint of the festival, The Used took to the main stage to push many over the hump they were experiencing. Bert pounced about the stage forcing the crowd the match his energy and to no surprise they gave as much as Bert delivered. This performance kicked everything into gear, with a new wave of energy the crowd was ready to unleash for the heavier acts that were to come.

We Came As Romans started the first of many pits to come at Warped, with hard hitting drum beats drowning all other sound, as they went for heavy instruments to pump the audience, Crown The Empire owned their pits with their duel vocalist unleashing some shuttering screams.

This level of dedication became the norm during the day, with each act satisfying old fans while also picking up a few new ones. I stumbled across RDGLDGRN who are an American hip-hop infused rock act and must say they stood out as the most unique sounding band on the bill. Leading the crowd with slick beats that flowed alongside reggae guitar work created an easy atmosphere for the crowd to groove along to.

If people needed a break and wanted to witness something different, the half-pipe was set up with a mixture of cyclists and skaters putting on a show for onlookers and was surprising enjoyable. Crowds would cheer on skaters as they’d pull off intricate maneuvers until the late afternoon.

Leading into the finals hours of the night, The Amity Affliction rewarded their fans with the heaviest sounds I’ve heard from them, opening for a brutal wall of death. Beside them Canadian punk rockers Simple Plan invited the crowd to sway along to their catchy sing-a-long anthems and surprised everyone as Jenna from Tonight Alive joined them for “Jet Lag.”

With the night soon coming to an end, Parkway Drive did not fail to finish strong as the final hardcore act, giving everyone the final chance to release everything in the mosh and once done all that was left to join the crowd hoping to get a glimpse of The Offspring. Giving a good dose of nostalgia with a mixture of newer material, this performance easily rivaled their appearance at Soundwave earlier this year. Finishing with “Self Esteem”, the final song echoed with the voices of the crowd as they sang along to this classic and that set the benchmark of our first Warped Tour since 2001.It is promising to see the success of a festival especially during a time of uncertainty for the industry; hopefully we get to relive this experience next year for it was clearly missed.